Fresh off a fashion show inspired by St. Tropez’s Le Club 55 on Pampelonne

Beach, super-chic couple Erin and Thomas Ribeiro of William Street’s Rib & Rhein boutique (86 William Street, Newport)  unveiled their latest global finds including bejeweled tops in a cast of brilliant hues, super-skinny jeans and body-hugging natural fiber tanks. As the sun cast its last golden light on the Hotel Viking’s seasonal Top of Newport bar, models strutted their stuff donning Rib & Rhein merchandise from head to toe. With remarkable hair and make-up by Frank Antonio Salon (22 Bellevue Avenue….owner Frank Barbosa jets off to Morocco this fall to beautify the cast of Sex & The City, including fashion icon SJP as Carrie Bradshaw, for their much-anticipated sequel…), the gals looked stunning as they mingled among admirers. “We want to present our contemporary vision of classic Newport that is appeal 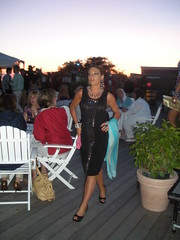 ing to all ages,” says Erin, who accomplished the goal by pairing ethnic pieces like Indian kaftans with traditional English/American attire.

In a toast to Newport’s off season, I defined Rib & Rhein as “Tribeca and St. Barths collide” in a February edition of Daily Candy; and it’s true. Warm colors, natural light and east-meets-west eclectic home accents make shoppers feel right at home (or in their dream loft). In a city a bit more skewed to women in terms of fashionable offerings, the boutique offers a small but distinguished collection of menswear, including luxe European linen shirts, which is no surprise considering owner Thomas Ribeiro is arguably Newport’s best dressed man. Spare some time to peruse this en vogue bazaar-like boutique; you won’t regret it.