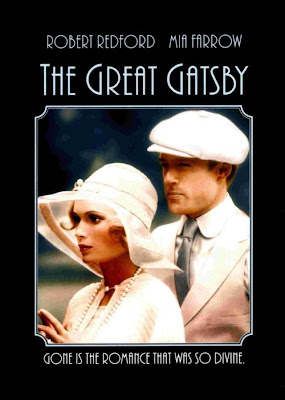 From finger waves to fabulous fringe, women’s fashion in the 1920s was reflective of the increased liberation demonstrated by rising hemlines and lopped-off locks. The swinging, post-war social scene is perhaps described best in F. Scott Fitzgerald’s 1925 classic The Great Gatsby, chosen for the National Endowment for the Arts program, The Big Read. (Find out more about the program HERE.) Dapper protagonist Jay Gatsby, played by Robert Redford, and seemingly superficial Daisy Buchanan, played by Mia Farrow, are depicted most memorably in the 1974 film adaption, with the screenplay by Francis Ford Coppola. Much of the filming was done here in Newport to create the fictional East Egg and West Egg villages of Long Island, New York.

This Thursday, Rebecca Kelly, assistant conservator at The Museum at the Fashion Institute of Technology in New York, will speak about the references to dress in The Great Gatsby and how they contribute significantly to the development of many of the novel’s underlying themes in an 11 a.m. lecture entitled, Dressing Up Daisy: The Facts Behind the Fiction of Fashion in The Great Gatsby.

“The word Gatsby itself is synonymous with beaded dresses, long stands of pearls, and white flannel suits,” says Kelly. “Shorthand for all that encompasses the Roaring 20s, or the ‘Jazz Age’ as Fitzgerald himself dubbed the era.” Kelly confirms that the role of dress in the novel is indicative of the loosening rules of etiquette during the 1920s due to societal shifts resulting from a number of contributing factors. “Beginning around 1900, industrialization and progress in the mass production of clothing allowed for styles and quality of dress that were once a luxury, only available to the very wealthy, to become increasingly accessible to a wider range of the socio-economic strata,” she says.

Kelly will specifically compare clothing in the novel to the clothing chosen for the 1974 film version of The Great Gatsby that was filmed here in Newport. “When we think of it, we would all certainly know how to dress when invited to a Gatsby ball or party…But who put these images in our heads, was it really F. Scott Fitzgerald?  Or was it perhaps costume designer Theoni Aldredge, who costumed the 1974 film version.  Many comparisons will be made to film stills vs. actual images from 1920s fashion magazines.”

The lecture, taking place this Thursday, February 18th at Rosecliff at 11 a.m. is free, but space is limited and advance registration is requested.  Call (401) 847-1000 ext. 154 to inquire about space availability.