Last Thursday, I had the pleasure of speaking with Mitchell Owens, Editor at Large at ELLE DÉCOR magazine, who will be delivering the final 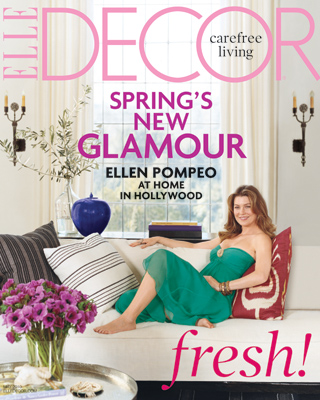 presentation at the Newport Symposium this Wednesday. He absolutely gushed about Newport,  using words like “ravishing,”  “extraordinary,” and “stunning,” which should make us walk a little taller today and be grateful for being a part of this community — whether you live here or make it a point to come back often. Mitch is just one of a handful of notables that are scheduled to be in Newport for events this summer (more on that later). For now, here’s a portion of our Q & A:

What will you be covering in your Newport Symposium lecture?

What I’m going to be talking about is, and it’ so funny I had to come up with a title before I really thought of the specifics, but it’s going to be Riding High, Optimistic Chic American Interior Design in the 20th Century. We’re talking mainly between 1925 and1963; American designers who, at that time, we define as “front row decorating.” Rooms then were designed for people who wanted them published, for people who tho ught of themselves as stylish. There are a handful of d es igners, but I’ve limited myself to eight — I only have 45 minutes so I have to control myself! I have to leave a few out because I have to focus on a rip-roaring lecture of designers during that period that exemplified and reflected American optimism and design — beautiful settings for beautiful people. I’ll be talking about Ruby Ross Wood, George Stacey, William Haines and some names that I am hoping will not be as familiar, like Hobe Erwin. He was the set director for movies like the original Little Women [1933, starring Katherine Hepburn] and Gone With the Wind. He was a prominent New York decorator. I haven’t been able to find many of his interiors, but I did find three. I think I approach the talk in three sections: East Coast, Chicago and West Coast.

What is your impression of Newport?

I’m crazy about Newport. It’s one the most ravishing cities in America. I’m amazed that I haven’t been back in eight years, since my daughter’s been born. Like Palm Beach and the North Shore of Boston, there’s an extraordinary array of architecture and I’m looking forward to getting into some houses.

Outside of the Symposium, how will you be enjoying Newport?

There are so many curious things about Newport. I’ve never been to Rough Point, and I’m hoping to make it there. I’m also hoping to see Oastie Charles, who I haven’t seen in so long I can’t tell you. I’m longing to visit the John Stevens Shop — they do amazing gravestones. When I die I better have a John Stevens planted over my remains, or I’m going to very angry! And Touro — it’s one of those unsung amazing things that every city wishes it had. There’s way too much history in Newport, you can wander, wander and wander…. I love architecture, so Newport is a paradise, and I’m always so deeply impressed the Newport, more than say other cities of its ilk, has not destroyed things.

Feeling any pressure about speaking?

No, I went [to the Symposium] years ago and enjoyed it enormously. My lecture is the dessert, it’ll be fun and a little frothy; a nice closing moment.

Portions of this interview were originally published on Newport-Now.com. For more information on the 2010 Newport Symposium, visit www.newportmansions.org/page10000350.cfm