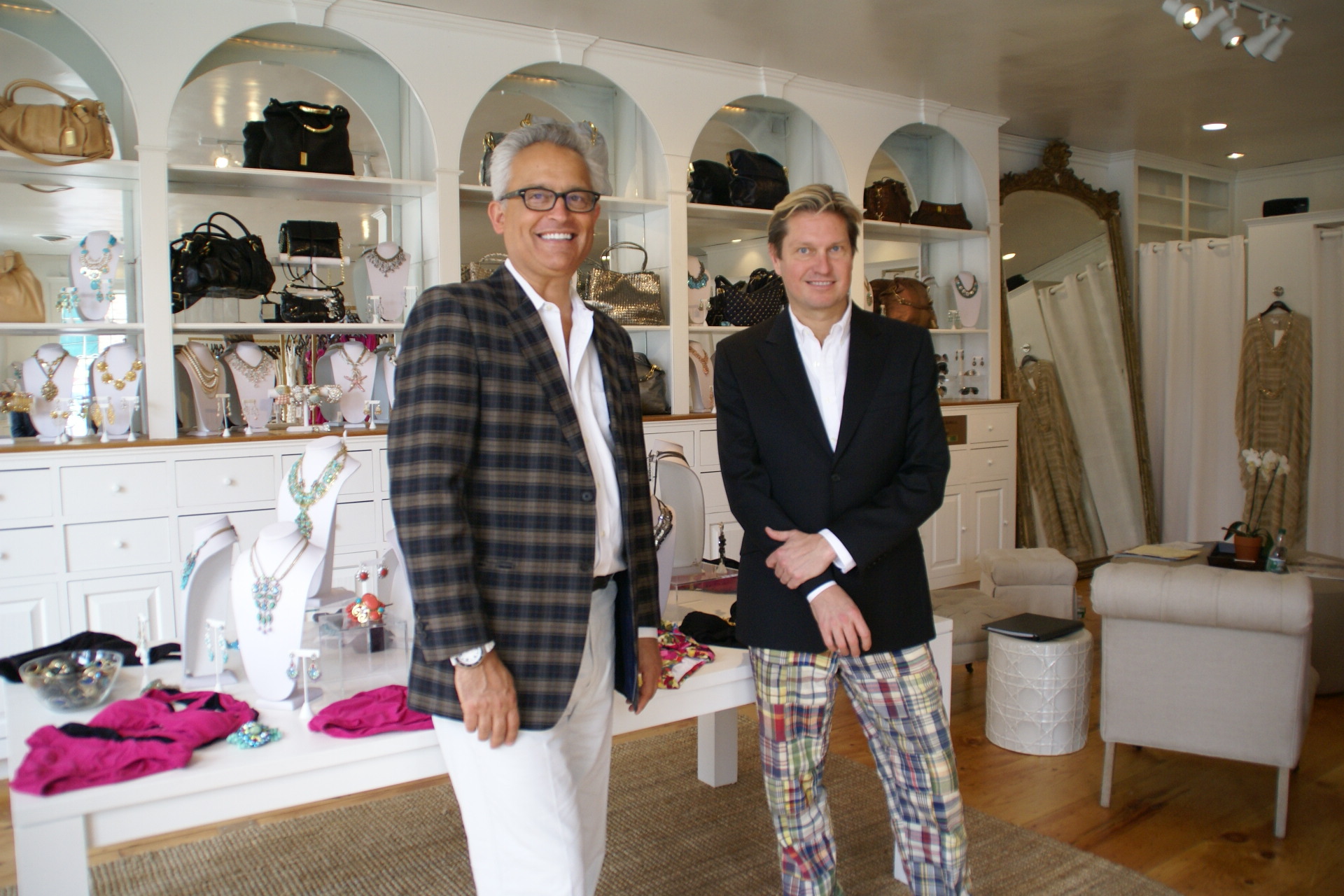 Mark Badgley and James Mischka in their Bellevue Avenue Shop

While chic new names including Lily Holt, Sequin, Boo Gemes and J. McLaughlin have filled the retail real estate gaps along Bellevue Avenue within the past few weeks, the addition of internationally-acclaimed Badgley Mischka is surely the feather in “the avenue’s” fashionable cap.

Best known for their exquisite couture gowns that grace red carpets around the globe, the lauded design duo of Mark Badgley and James Mischka have had their sights set on Newport for a pop-up concept store for some time. “With Worth Avenue in Palm Beach being torn up, we

thought we should look at different locations for the summer, maybe permanence, and Newport was on the top of our list because so many of our customers do come here and we always loved Newport,” says Mischka, referring to the stylish stretch along Palm Beach’s tony Worth Avenue, which is presently undergoing considerable construction. “Newport has always been very inspiring; we’ve gone to the mansions and always pictured our couture gowns fitting in there,” adds Badgley.

The two designers, who met while studying at Parsons School of Design in New York, spent time designing for leading names— Badgley for Donna Karan; Mischka, the men’s collection for WilliWear by Willi Smith— before launching their own line in 1988. Since then, Badgley Mischka made their mark in the fashion industry by establishing a signature style, inspired by the old Hollywood glamour of the 1940s, that truly celebrates the well-dressed women.

It makes sense that the designers were drawn to the 1500-sqaure-foot space at the corner of Prospect Hill Street and Bellevue Avenue, which was formerly occupied by design and home accent outfit Carroll Michael & Co. for more than thirty years. At some point before that in its history, the space was an apothecary. With warm, wide-plank pine floors, superfluous natural light, built-in shelving and cabinetry, and a pair of floor-to-ceiling arched windows, the address was an idyllic locale to house Badgley Mischka’s third retail location (their line is carried at upscale department stores including Bergdorf Goodman, Neiman Marcus, Nordstrom and Saks Fifth Avenue). “We love the space 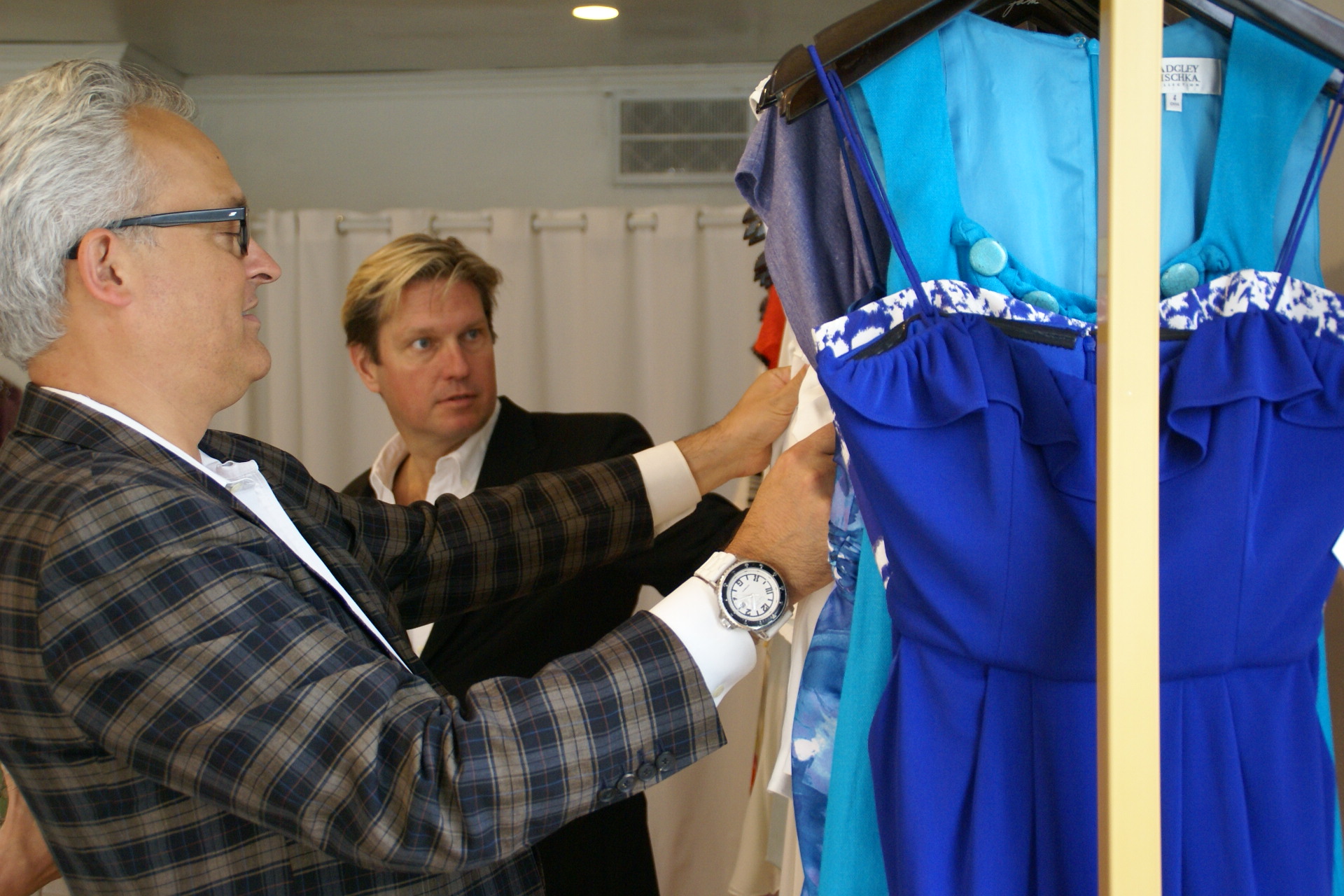 because it is sort of historical, and our store on Sunset Boulevard has a sense of history, and our new store on Rodeo Drive that we’re opening in July or August is in the old 1920s Writers’ Building, where Laurel and Hardy had their offices, and we’re keeping the history of all these spaces intact,” says Mischka. “We didn’t want to make this space slick and modern; we wanted to make it clean, like a gallery.” With the mix of hand-selected pieces from the Badgley Mischka Collection, Badgley Mischka Couture and the more contemporary Mark + James by Badgley Mischka, the space is akin to a gallery; most especially recognizable in the couture pieces that cast little reflections of light around the room due to the gowns’ elaborate embellishments and gemstone details. “We love embellishments,” Badgley gushes. Two rows of brightly-hued formal gowns, jewel-encrusted caftans and blouses made from rich silks that cascade over the physique hang in the center of the space, while less formal pieces— tops, day dresses and more— align one wall and along the old apothecary’s shelves, once lined with pills and potions, is eye-catching jewelry (many pieces— coral earrings, scallop shell bracelets— inspired by the sea), handbags and accessories. “I think the swimsuits are going to do well as well; they’re very ’40s inspired. This one is my favorite,” says Mischka, holding up a one-piece swimsuit with a slightly twisted ruched neckline. “It’s so simple, but the draping is just so flattering…it’s so Rita Hayworth.” The two say their current cruise collection, which debuted in Miami, was inspired by the Gilded Age, “so Newport has always been an inspirational place for us,” explains Badgley. 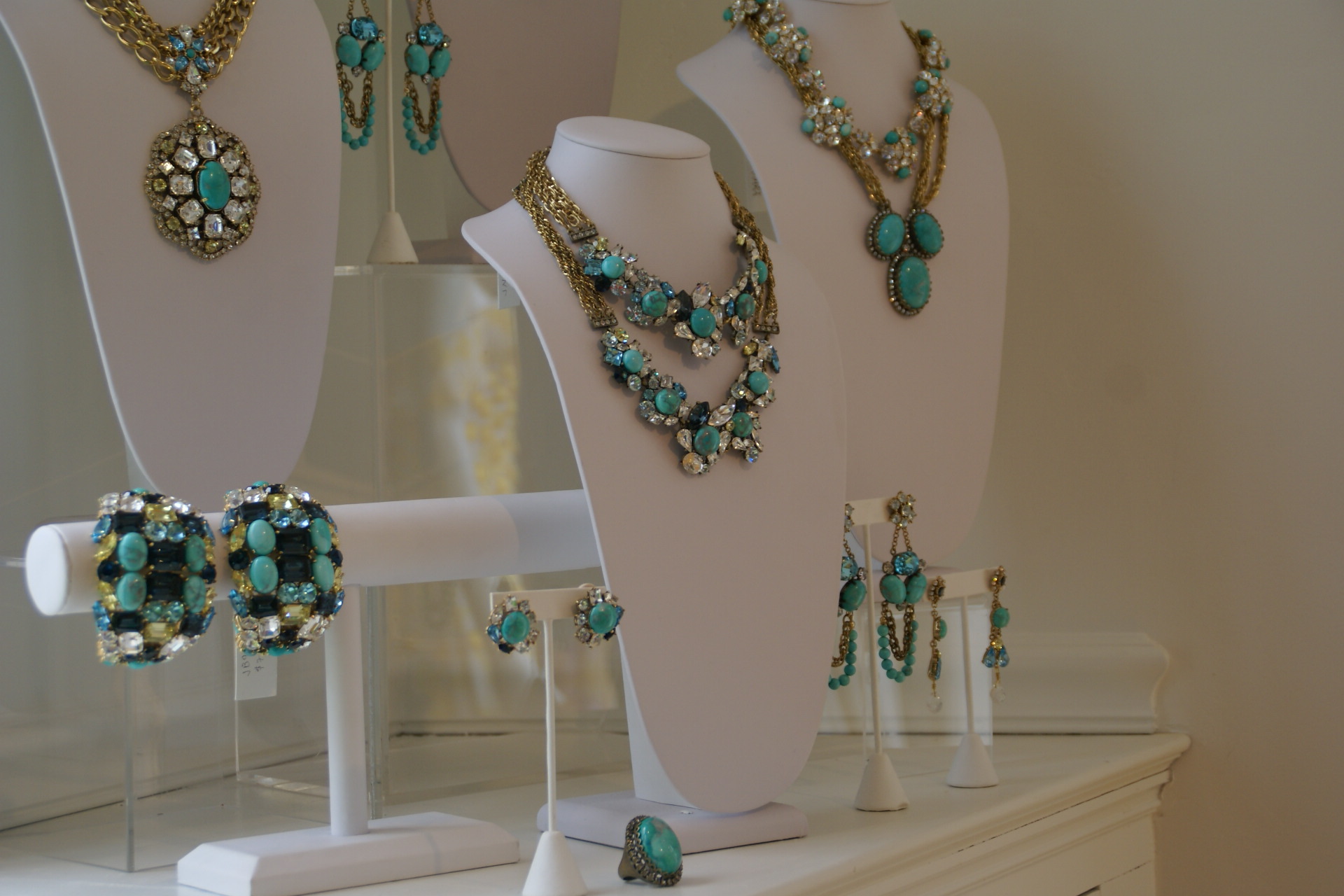 way. “We just did new ones for the store. They’re not here yet, but are all done as hydrangea; pink hydrangea and blue hydrangea— they’re divine,” says Badgley.  During their tenure here, they’re likely to do a few bridal trunk shows, which will be a grand addition to Newport’s thriving bridal industry. As for more casual pieces, there’s a diverse offering each with their own appeal. Pulling a knee-know flowered frock out to show me, Mark Badgley smiles, “They’re feminine, happy, pretty, little garden dresses…I think ruffles work up here, don’t you think?” I couldn’t agree more.

The Newport Badgley Mischka shop at 115 Bellevue Avenue, say the designers, will be open here through early autumn.

Portions of this article originally appeared on Newport-Now.com; all photos except runway image by Tom Shevlin