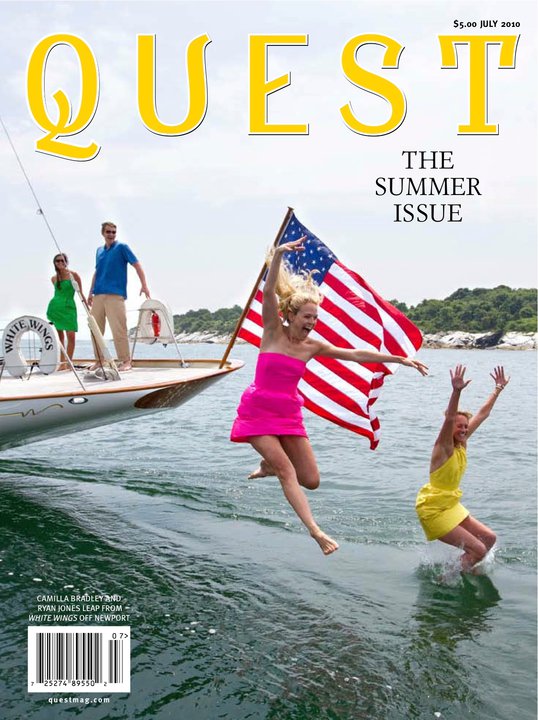 Quest Magazine’s July 2010 issue, The Summer Issue, featured Newport’s own Camilla Bradley on the cover leaping giddily off the stern of White Wings, clad in a charming pink dress of her own design (the Oscar dress). Her co-conspirator joins her in the high sea hijinks donning Bradley’s sun-hued, silk Cortina dress–both as refreshing as the saltwater they’re plunging into.

The City-by-the-Sea takes a starring role inside the pages too, with a spread on our very own Clarke Cooke House on Bannister’s Wharf (pgs. 62-63) and a feature entitled Easy Summer Living (that also includes other summer hot spots like The Adirondacks, Millbrook (NY), and Southampton. The Newport segment

includes a photo of the Grand Dame of Newport, the late Eileen Slocum, who is featured in Behind the Hedgerow,  a documentary that takes viewers inside the private world of aristocratic Newport, which premieres at the Rhode Island International Film Festival tomorrow evening, and debuts in Newport on Saturday with a 2 p.m. showing at Salve Regina University followed by a post-screening reception, Tea with the Slocum’s, on the family estate (Tickets $30). Visit www.BehindtheHedgerow.com for details and information. A screen will also take place on Aug. 26th at the Jane Pickens Theater (watch the trailer by CLICKING HERE). In the magazine, there’s also a piece by Bradley on the story of White Wings and the story of the W-Class Racing Yachts, which make their home at Newport Shipyard. Kudos to Bradley and Quest on a grand issue!