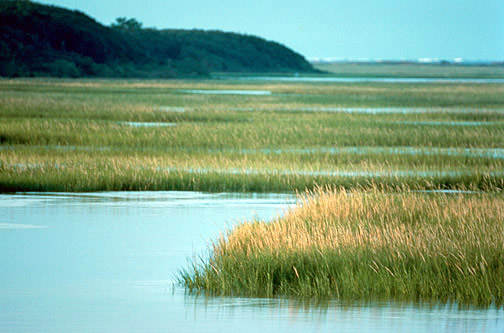 Just a bit ago, I had to hop down to the Big Apple and, taking a look at the time I’d have to hit the road, I decided to take the train. Amtrak departs Kingston, Rhode Island, up to nine times daily, and frankly, if you score spot opposite the I-95 side of a railcar, the view is stunning as you cruise down the Southern New England coastline (ps: CLICK HERE for information about Amtrak’s VISIT RHODE ISLAND DISCOUNT). The flora and fauna throughout the tidal marshes proved to a stark reminder of how vital this coastal ecosystem is, especially when speculation of the long-term effects of the BP oil spill in the Gulf still dominate the news. Zipping through the wetlands by rail (I even saw a mature buck quenching his thirst near the Connecticut border), I couldn’t help but crunch the numbers: More than 640 miles of coastline in the Gulf region have been oiled (reported in multiple media outlets). Its 160 miles from Kingston to New York City. Just for some perspective, 640 miles is the distance from Kingston to Cape Hatteras in the Outer Banks of North Carolina.

Wildlife Federation’s Oil Spill Prevention Fund, adding to the nearly $4400 already raised. So, if you’ve been dying to try their now-famous “Not Just a Burger” Kobe Burger that was rated #3 on GQ Magazine’s 20 Burgers to Try Before You Die,’ (a list made even more famous when Oprah’s BFF Gayle King jet set across the country to savor a handful of the winners), or their the popular Lobster BLT (at right), now is the time. The donations will be ongoing through September 30th. Don’t forget: the terrace at The Spiced Pear is still offering $0.25 martinis (up to two) with the purchase on an entrée. I suggest their own Spiced Pear martini!

PS: As long as we’re talking cuisine, my Amtrak adventure reminded me of the Café Car’s delightful little cheese “plate.” While Mini Babybel Gouda and Carr’s Table Water Crackers may not be considered gourmet, what a nice departure from chips, pretzels, et al.  Who knew? Nicely done, Amtrak.