After months of anticipation, Vogue, NYC Mayor Bloomberg, NYC & Company and the CFDA unveils Fashion’s Night Out (a.k.a FNO), an unprecedented global initiative 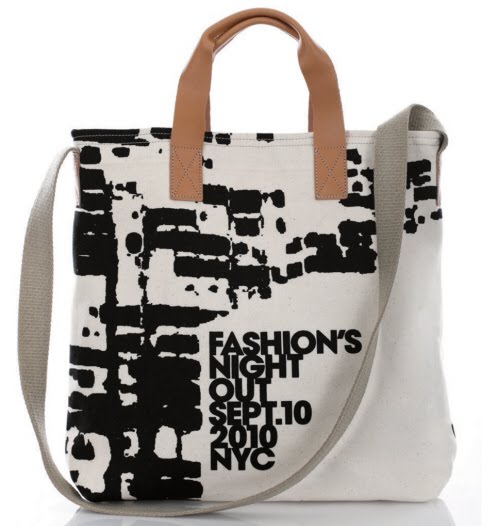 created to toast all that is fashion, restore consumer confidence, and boost the industry’s economy. Tomorrow night, FNO returns to the Big Apple, and, celebrating its sophomoric effort, will launch in cities nationwide to put the fun back in shopping with designer appearances, live windows, celebrity guests, and more utterly fabulous events. Around the world, and led by fifteen international Vogue editions (Australia, Britain, China, France, Germany, Greece, India, Italy, Japan, Korea, Portugal, Russia, Spain, Taiwan, and Turkey), each country will celebrate Fashion’s Night Out on

Rhode Island hasn’t quite made FNO roster just yet, but I think we’ll have to do something about that! In the meantime, we can still be oh-so-chic by sporting the official limited-edition tote created by New England handbag company Brahmin (we praised the brand on the Stylephile Shop Shot HERE), who worked with Vogue to design the official FNO canvas tote bag that will be sold locally at Brahmin on Bannister’s Wharf with a portion of proceeds to benefit the NYC AIDS Fund.

CBS.com will be streaming the event live from Lincoln Center starting at 7 p.m., hosted by Vogue editor-at-large André Leon Talley.