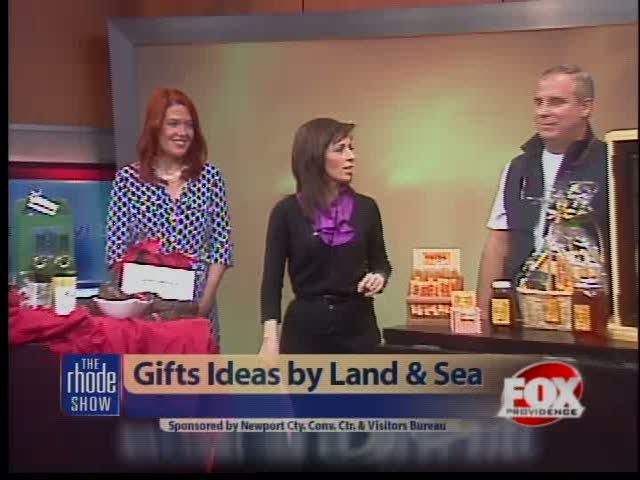 A whole team from Newport headed up to see our friends at The Rhode Show on FOX Providence this morning and we were all the “buzz” in the studio as Jeff from Aquidneck Honey (here forth known as Jeff the Bee Guy, and you HAVE to check out the web site if only to see how cute the little bees are that chase the cursor!) brought a contained real live beehive. Executive Chef Eric Steinhauer from the Newport Marriott was on fire in the kitc 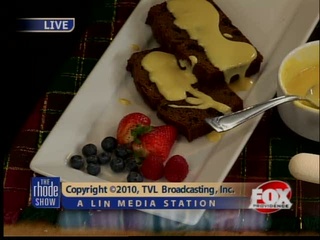 hen, whipping up a traditional fruit and nut gingerbread from the oldest surviving colonial cookbook (housed at the Newport Historical Society) with a glaze sauce that includes a dash of Thomas Tew Rum from Newport’s own Coastal Extreme Brewing Company (makers of Newport Storm). YOu can get the flavor of a real 18th century with Newport Restoration Foundation’s Christmas with the Whitehornes. And we brought with us some wonderful local gift ideas from land and from sea including:

-For the hostess: A gift box from Greenvale Vineyards featuring their Skipping Stone White and Vidal Blanc

-For the gourmand: Lobsters from the Lobster Shack on Newport’s State Pier from from Newport Fisherman’s Co-op (open through December and priced per piece/per lobster, not per pound), which also has gift certificates

-For the beer lover: A 6-pack of Newport Storm’s Winter Ale, a bottle of the brewery’s special “10” brew, which ferments right in the bottle, released just once year.

(Plus, Jeff Tahlmore Twist on Angell in Providence was shaking up martinis, so, yes, it was a rum, beer, wine and martini morning…) Speaking of wine and spirits, Newport Vineyards is celebrating the holiday season

and the outstanding 2010 harvest tomorrow from 4-5 p.m. with a fabulous assortment of gourmet specialty foods at the winery, plus gifts available for sampling and purchase directly from the New England gourmet sources. The winery will be providing tastes of all its wines, along with Barrel samples from future releases, and the winemaker suggests stocking up for the holidays! Admission is complimentary for case club members, all other tickets are $15. RSVP (suggested) to 848-5161 x0 or email info@newportvineyards.com.

And Jeff of course chatted about the Aquidenck Honey gift basket, our  Hometown Holiday featured gift today, filled with 1-pound jars of pure, local, pesticide-free, untreated, never heated, raw honey, a 19-ounce dishwasher and microwave safe mug, honey straws, lip balm, assorted teas and chocolates. They are $25.00 and Jeff can add cut comb honey for an additional $10.00. How’s this for local service: customers can pick the baskets up or Jeff will deliver locally at no cost.