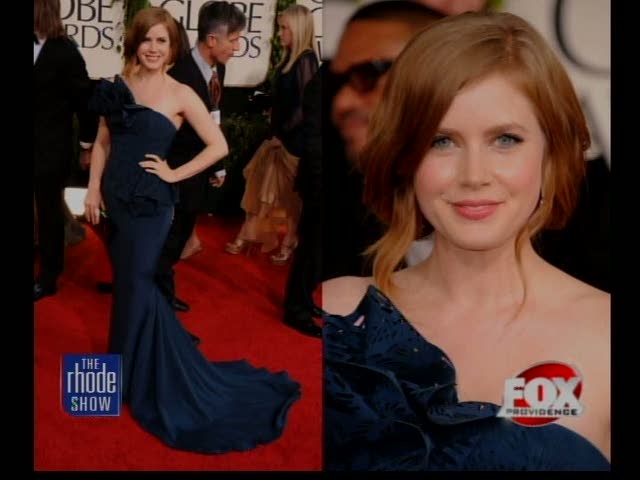 Last night I was busy taking notes on Golden Globe fashion hits and misses for this morning’s Rhode Show on WPRI/FOX Providence (in between catching the football score, of course). Overall, there was a ton of great gowns, oodles of color and crystals, and polished hair and makeup on the ladies of the red carpet. It was hard to choose the very best; but here’s what I profiled on the show. (CLICK HERE TO SEE THE SEGMENT).

Eva Longoria in Zac Posen Simply elegant, hugged her petite frame in all the right places, had a bit of a daring décolletage but it was balanced by sweet cap sleeves, hair and makeup was subtle to let the dress do the talking…I call this the ‘Tony Parker, I hope she was worth it, honey, because you ain’t never having it this good again!’ dress…

Amy Adams in Marchesa I’m calling her my Golden Globes dark horse because I’m not expecting to see a ton of “best dressed” press on her today, but her rich blue one-shoulder gown featured laser-cut detail from the shoulder to the hip. It was 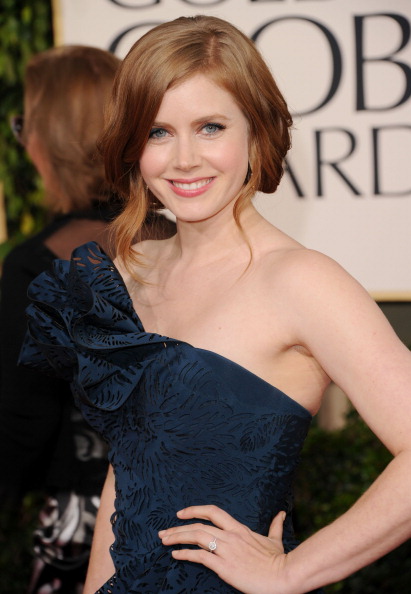 a lot of dress but she complemented it perfectly with loose, upswept locks and natural makeup (read how her makeup artist, Molly Stern, created the look here). Bonus points to this new mother who chose the perfect gown to flatter her incredibly shrinking figure.

January Jones in Versace You could practically hear jaws drop when the Mad Men starlet exited her limousine in her smokin’ hot, strategically placed Versace number crafted from long fringe and finishe

d with a polished coif and Chanel red lips. I’m not quite sure she’s a Rhodes Scholar or anything, but she sure knows how to make heads turn in a sea of gorgeousness.

Dianna Agron in J. Mendel Nude, taupe, beige and pale pastels were aplenty on the red carpet last night, but this Gleek did it best in my opinion. Her soft, half-pulled buttery 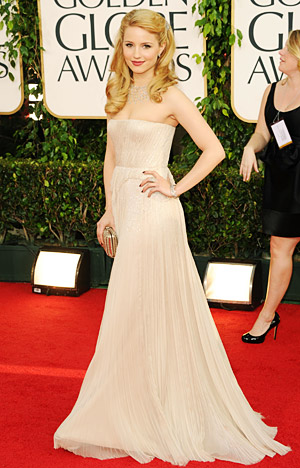 Lea Michele in Oscar de la Renta Glee’s resident drama queen might be relatively new to red carpet events but she works it like a pro and didn’t disappoint last night. In a girly pink, one-shoulder

Oscar  boasting an asymmetrical ruffle cascading over layers of dress.

Anne Hathaway in Armani Privé Oddly enough, this dress grew on me the longer she 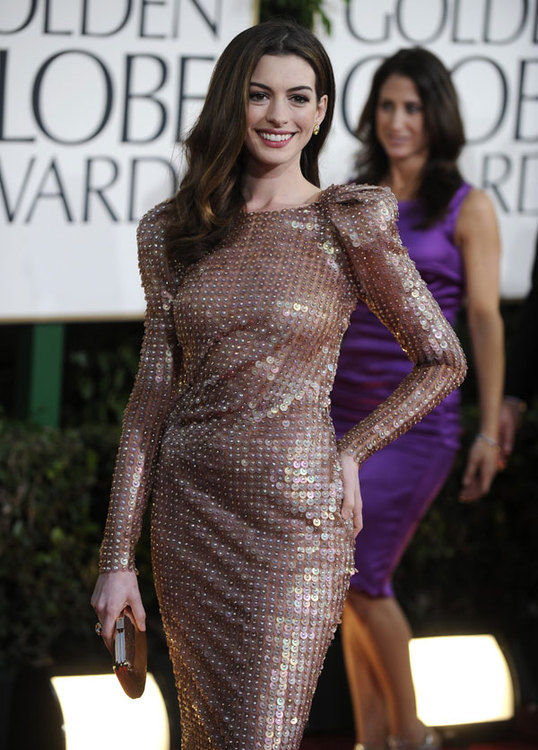 spent on the red carpet. Sure, the poufy sleeves were tres Dynasty and the fit around her waistline was imperfect, but the down-to-there back made it decidedly modern. Her stylist, the famed Rachel Zoe, is all over this number as retro-influence permeates Zoe’s looks. 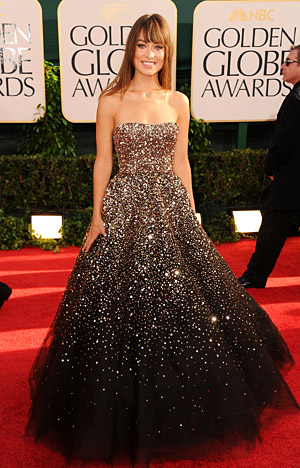 Olivia Wilde in Marchesa Once again she was first on the red carpet and made a splash with this huge, blinged out ballgown. I just didn’t feel her casual hair and cat-eye makeup were well suited for such a glamorous look. Her gold, crystal-encrusted Louboutins, however, were breathtaking.

Claire Danes in Calvin Klein Collection You could tell this was Calvin from a mile away: simple, timeless, classic. It fit her perfectly. Shout out to Emma Stone as well who also rocked Calvin. Both blondes wore peach/pink hues. 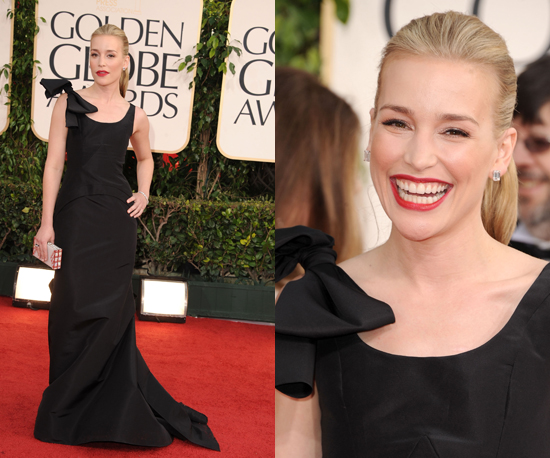 Piper Perabo in Oscar de la Renta Who knew the Coyote Ugly star could look so sophisticated? The black, tank top neckline was festooned with a simple black bow at the shoulder while the sculptured skirt was feminine and flouncy.

Jane Krakowski in Badgley Mischka Even if she wasn’t on the cusp of her third trimester, the 30 Rock funny girl gets two thumbs up for this exquisite Badgley Mischka in cornflower blue. Even better, her polished but loose flowing tresses and glowing makeup finished the look of to perfection. 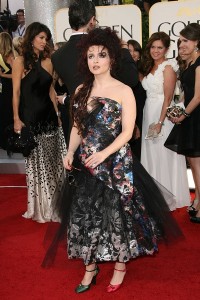 Michelle Williams in Valentino I’m disappointed on two fronts. First, because Michelle isn’t caught up in trends and usually dons something a little atypical but equally stunning. This flower power piece, in beige no less, is doing neither her feminine figure nor her lovely short haircut any favors. Secondly, I’ve never met a Valentino number I didn’t like, but there’s clearly a first for everything,

Leighton Meister in Burberry Laura Ingalls Wilder called, she wants her prairie frock back. Leighton is young and fresh, as her hair and 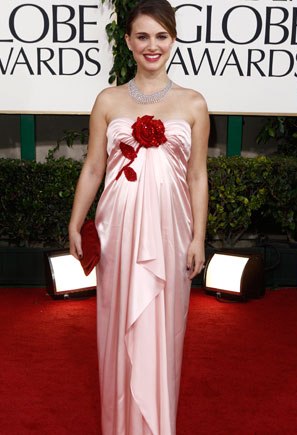 makeup showed, but the dress just didn’t work, especially on the red carpet.

Natalie Portman in Viktor and Rolf It pains me to write this as she usually knocks it out of the bark, but the Black Swan’s salute to Valentine’s Day dress just didn’t connect in my opinion. The red rose on the draped satin or silk…meh. From the neck up though, she gets and A+.  For a fab look from another expectant mother see Krakowski, Jane.

Helena Bonham Carter in Vivienne Westwood** Okay, this is the obvious choice (hello, two different color shoes…did she have to buy two pair or did they come like that?), but I’m giving her an asterisk because Helena nearly always dresses eclectic and doesn’t dress for the red carpet but instead for herself. So, in weird way, you go with your unpredictable self!

What was YOUR favorite dresses and hot messes? Let me know by emailing newportstylephile@yahoo.com, post on Stylephile Facebook here, or give a shout-out on Twitter at @newportSTYLE