Fans of Project Runway watched designer Seth Aaron Henderson, a punk-rock-meets-glam-meets-goth garment guru, sew up top honors during Season 7 of the immensely popular reality TV competition in The Battle for Bryant Park. As New York Fashion Week kick off in the Big Apple tomorrow, Henderson has his sights set Lil’ Rhody, as he’ll join Season 8 runner-up Mondo Guerra for an insider’s look behind the scenes of Project Runway at the University of Rhode Island on Wednesday, February 16 (8-11 p.m., ticket information below).

I chatted with the delightfully candid Seth Aaron from his Portland, Oregon, studio in advance of his URI appearance, and it seems the future is nothing but bright for the burgeoning designer.

Reflecting on your Project Runway experience, do you feel the show accurately depicted who you are, and how has post-Project Runway life been?

It was totally real. It was a 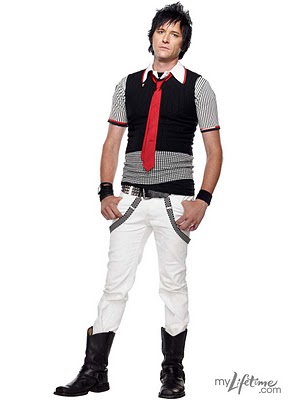 lot of work, a lot of stress, and you do that 7 days a week, on like 3 or 4 hours sleep. Not everyone can operate on just that little amount of sleep, and people can start to get cranky but it was all real. … I get emails from all over the world—France, Germany, China, Japan—every single country, and it’s really cool. I do get recognized, and I look at is as my job. I signed up for it. You can’t runway and hide, that’s why I love these events (URI). I love meeting like 2000 new people…I’d rather be with them then like 50 in a room I already know. I like randomness, I don’t like staging or scripting. I’ll do an interview on TV or something and they’ll be like, ‘Here’s the questions,’ before and I’m like, ‘I don’t want to know!’

Some of the challenges seem limiting, especially when you have to stay within set parameters that can require using specific materials. Do you feel you were able to stay true to your aesthetic? (click MORE to read after the jump)

I stayed true to my aesthetic. It’s what you’ve got do to succeed. I went there and said, ‘I’m going all out.” Henderson, who is aiming at presenting his fall/winter collection at Los Angeles Fashion Week next month and Spring/Summer looks at New York Fashion week in September, likened preparations for the catwalks to Project Runway challenges. …Fashion runway shows are exciting, but it’s a show… It has to be sellable…it’s a fashion show and there’s always the fact that it needs to be translated down to real life…

What’s been the inspiration for your most recent collection and design work?

I’m really leaning toward Liverpool, 1960s; total mod scene … ultimately what inspires me the most is music. I listen to my music LOUD when I work, and I look at it like I’m designing for who he, or she, is singing about, where are they going, what are they doing, what are they wearing and extracting those ideas … I’m listening to the beat and I’m listening to everything … I like old country, I mean old, like from the 40s, and rock, hard rock, death metal, hip hop. I like everything. My son, he’s 14 and we hit shows, we hit Gaga, Slipknot…a good flow of music.

What can we expect when you and Mondo visit URI next week?

We’ve been all over—Utah, Michigan…It’s a general talk and then it goes to a Q&A and we do a meet and greet … it can  depends how it’s set up with the venue, but we talk about our design philosophy, our points of view, how it was being on the show, the pressure, and what it was like, what we saw, and random questions.