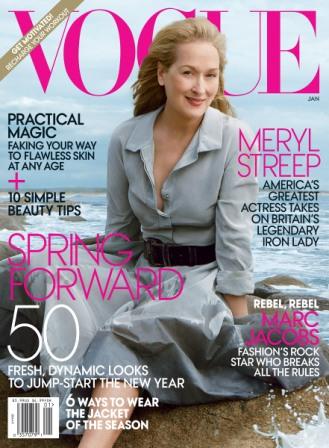 Why do we love Meryl Streep? Because she masters every role, whether a Polish Nazi camp survivor, a factory whistleblower, or a take-no-prisoners, high-fashion editrix? Because she works tirelessly for charitable organizations and causes close to he heart? Because she’s able to laugh at herself? These and about a million more reasons may explain why she is held in the highest esteem. Some actors set the bar high; she, quite simply, is the bar. 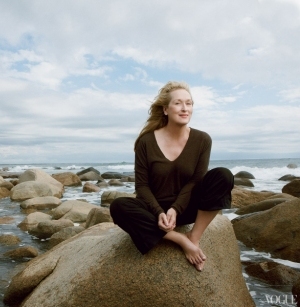 Meryl Streep is no stranger to Rhode Island, having soaked up Newport during the filming of Evening in 2007, but she also has deeply seated roots—her eighth great-grandfather was one the state’s first Europeans settlers. But this month, she embraces the Ocean State coastline with her stunning Vogue cover, kicking off the fashion bible’s 2012 with the January issue (and breaking the mold by being oldest woman to ever grace the cover!). Shot by legendary Annie Leibovitz in Charlestown, Streep’s image is just as compelling as the magazine’s feature on her and her crusade for a new National Women’s History Museum. Watch and be inspired by this behind the scenes video, read more here and pick up a copy today!

Photo appears in the January Vogue

Previous Post: « Let’s Get Physical
Next Post: “Is there anything more thrilling than a new frock?” -Lady Sybil … Downton Abbey Returns »