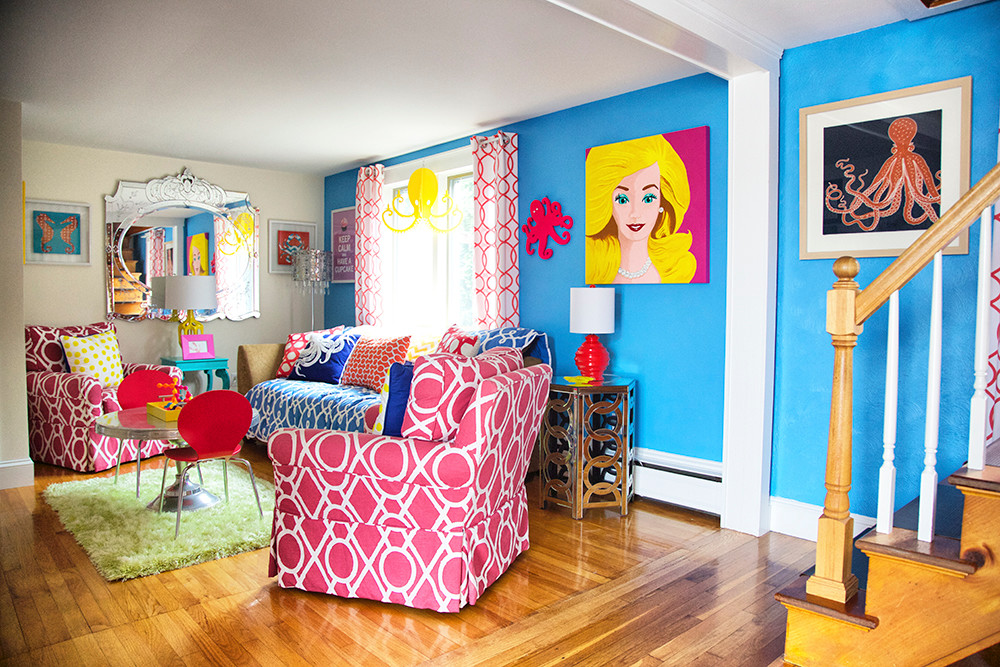 The October issue of The Bay Magazine, on newsstands now, features my monthly home feature. For details and more photos, pick up The Bay this month or CLICK HERE. PHOTOS BY MIKE CEVOLI

When Mary Ellen and Walt Frazier first started home hunting on Aquidneck Island in 1979, the two had big dreams and a small budget. A young couple with their two-year-old daughter Stephanie in tow, the small family came across a little ranch in Middletown that wasn’t exactly a palace.

“I remember my husband saying, ‘If we don’t buy this house, we’re not going to have a 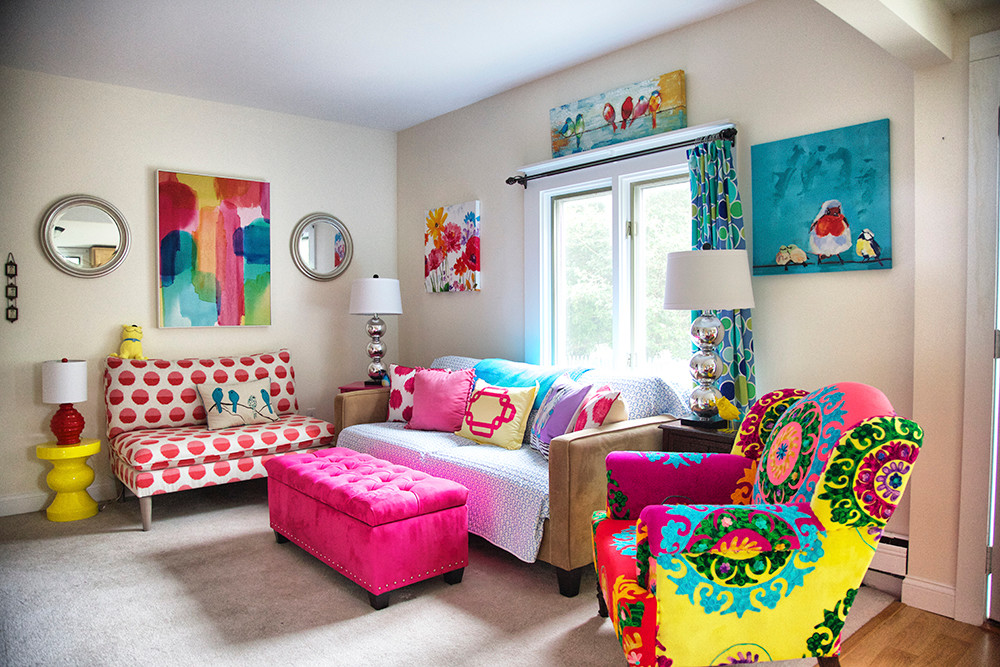 house,’” recalls Mary Ellen. “It had four tiny rooms with a dirt driveway.” But it was enough, so the little family moved in and made the house a home. “I think it cost $26,000 and the mortgage payments were a little over $100 a month – and we had a hard time paying it sometimes!”

The layout of the home was a little awkward as well. Mary Ellen says there was a small living room, and bedrooms bookending the, as she describes, “itty bitty” kitchen. “And you had to go through this tiny bedroom to get to the kitchen,” she says.

After getting on their feet, the Fraziers decided to expand on the home by adding a second floor. The space would accommodate a new master suite. “Then we took the other side of the house and added a great room. Later, we decided to move downstairs, so we added another master there – but this all evolved over quite a bit of time,” explains Mary Ellen. The couple even modified the home as recently as five years ago to create an in-law suite to accommodate Mary Ellen’s parents.

But as Mary Ellen first adjusted to the changes in the home, she also got in touch with a wonderfully whimsical side of her personality: decorating with an unabashed spirit. Color became her passion. Colorful window treatments, furniture, décor and artwork. Colorful light fixtures, decorative pillows and throws. Colorful accent walls. She looks around and has an epiphany: “I think I’m a closet decorator!”

It’s no surprise, really. Mary Ellen says she grew up in the age of neutrals and her childhood home reflected that trend. “If my mom put up celery green drapes it was like, ‘Oh my God!’” she laughs. So her penchant for personality in the home all makes sense, she explains. “Some people go off to get tattoos to rebel; I rebel with color!” 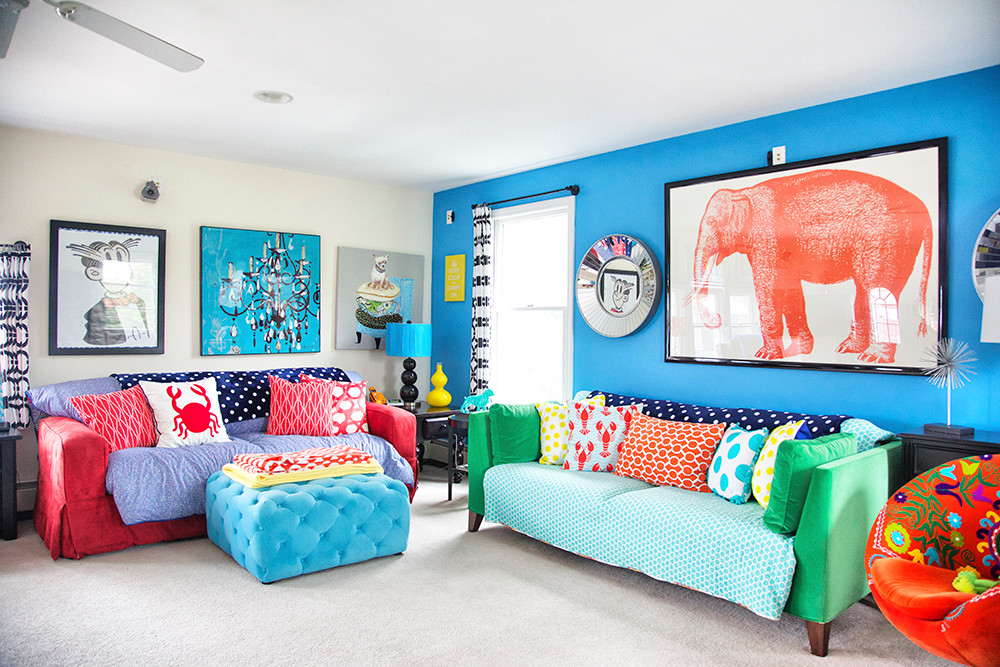 Mary Ellen says that through the decades, she has gone through various stages, like many homeowners. “The country stage, then all the antiques, the all-Oriental furniture and now it is what it is,” she says, which might be described as nautical meets pop art meets sophisticated sass. “I don’t know where the inspiration came from,” she says. “It’s just evolved.”

It’s not that Mary Ellen is all color, all the time. Many surfaces are linen white which serves as a baseline. But the accent walls (there’s a purple one and orange one, to name a couple), furniture (like the banana yellow hutch) and décor (like the pair of acrylic octopus chandeliers by North Kingstown artist Nicole Ketchum and her husband of Chandelier By NK, sporting hues of turquoise, fuchsia, green, orange and red) do all the talking. In the dining room, orange leather chairs strikingly contrast with the pair of purple chairs that are parked at each end of the table. In the kitchen, where the orange accent wall resides, there is an obvious “seaworthy” motif. The kitchen cabinets are brown, but that may not be for long. “In a year they could be white,” Mary Ellen hints.

As for Walt, he enjoys Mary Ellen’s decorative eye. “He’s not one of those husbands who has to go furniture shopping with me and look at every single thing. He just sits in his recliner and will go with anything,” she laughs. When Mary Ellen starts rearranging furniture, which is often, he goes with the flow. “Walt is just like, ‘Oh my God, there she 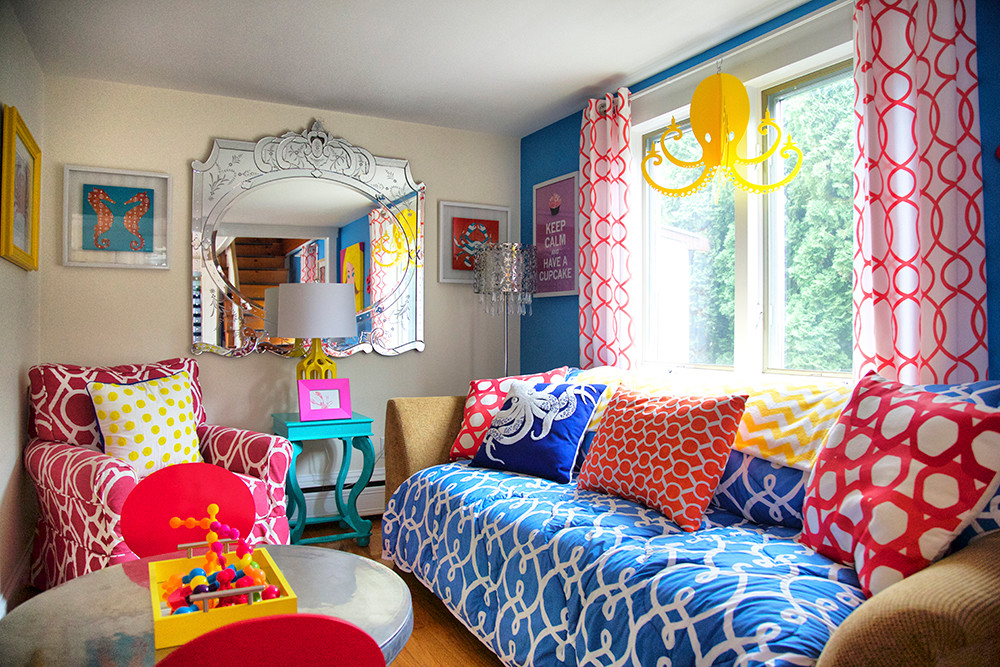 goes again.’” That isn’t to say Walt doesn’t pick up when Mary Ellen has a new design inspiration. “If I sneak a new chair into the house, a week or so later he’ll look up and say, ‘I see you bought a new chair…’”

While Mary Ellen sources her colorful pieces locally, she also names Home Goods as one of her favorite stores. She says she has gone shopping with her daughter Stephanie and might say to her quietly, “Did you see what that lady had in her cart? For her home?”

“And Stephanie will say quickly, ‘Mom! Have you seen what’s in your cart?’” Mary Ellen laughs. “And she’s right!”

Mary Ellen and Walt say they love the way their home looks, even if it is evolving all the time. “It’s not for everyone, but it makes us happy. People walk through the door and say, ‘I could never do this,’ but they also seem to love it.”

A cacophony of color, the Frazier’s home is decidedly warm and welcoming, so it’s no surprise it is a favorite place for friends and family to gather including their grandchildren. “We love this home – it’s a happy place.”

For details and more photos, pick up The Bay this month or CLICK HERE.