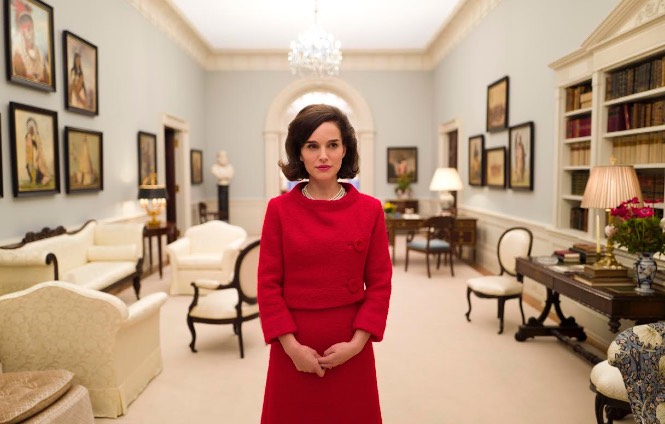 Jackie is the postmortem exploration into the mind of First Lady Jacqueline Kennedy in the days following the assassination of her husband, the 35th President of the United States. Playing at the Jane Pickens Theater now through Feb. 2 and directed by filmmaker Pablo Larraín, Jackie has been called “…a psychological portrait of the First Lady as she struggles to maintain her husband’s legacy and the world of ‘Camelot’ that they created and loved so well.” Yesterday, we learned it has been nominated for three Academy Awards.

Of course, the Kennedy legacy and Camelot—and all it entails—is inextricably tied to 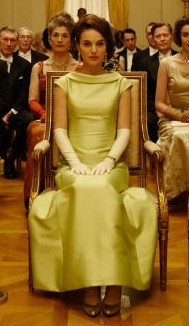 Newport. The City by the Sea is where Jackie spent much of her childhood, and ultimately where she exchanged vows with the then-junior Senator from Massachusetts. The film doesn’t address those earliest days as man and wife, but in flashbacks, we see moments that reflect Jackie’s legendary style. Among them:

The recreation of Jackie’s globally-viewed 1962 televised tour of the White House (the First Lady won an Emmy for the CBS special) where she dons a memorable red suit by Chez Nixon inspired by a Christian Dior design (top). Her now-iconic three strand pearl necklace peeks through the bateau neckline and her brunette bouffant coif is perfectly styled. This look is seen on the film’s official promos.

The pink Chanel* double-breasted suit worn in Fort Worth, then Dallas, on that fateful November day. Featuring navy blue lapels and paired with a coordinating pillbox hat

(said to be a favorite of the President) was technically made by Chez Ninon with Chanel boucle wool with permission from the esteemed French fashion house. For this film, costume designer Madeline Fontaine worked directly with Chanel, hand-dying the fabric until it imitated the perfect shade of pink.

Recital of cellist Pablo Casals at the White House, November 13, 1961. I can’t say for certain the film is portraying this specific legendary recital, but the First Lady was known for her passion for arts and culture which included regularly welcoming famed musicians at 1600 Pennsylvania Avenue. In the scene, Jackie is captivating in a soft yellow ivory silk sating evening gown with cap sleeves and cowl neckline paired with elbow length gloves. The gown is emblematic of the many (more than 300) designs she wore by designer Oleg Cassini (above left). The silhouette is reminiscent of the light blue silk shantung evening dress by Chez Ninon during a state visit hosted by Queen Elizabeth II at Buckingham Palace. Notably, she wore the same shade here in 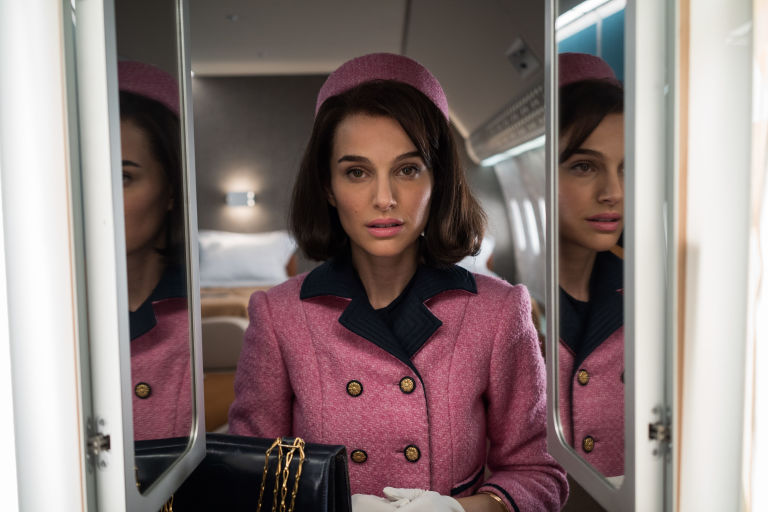 Newport to a dinner during the 1962 America’s Cup (designed by Oleg Cassini) hosted by Ambassador Howard Beale. I wrote about it here a few years ago.

Lastly, we see Jackie in mourning, donning black ensembles through the White House and the surrounding funeral events and ceremonies. Jackie wore a black Givenchy suit with traditional Spanish mantilla veil to escort the flag-draped casket to the U.S. Capitol to lie in state. The next and final day, she led President John F. Kennedy’s funeral procession on foot to St. Matthews Cathedral donning a long sheer black veil.

Jackie is playing at various times at Newport’s Jane Pickens Theater through Feb. 2.

Previous Post: « 5 Fantastic “Wear Right Now” Pieces from J. McLaughlin (including my favorite) – And All On Sale
Next Post: Shaken, Not Stirred: The Pink Sky at Night, Sailor’s Delight Newport Gimlet »