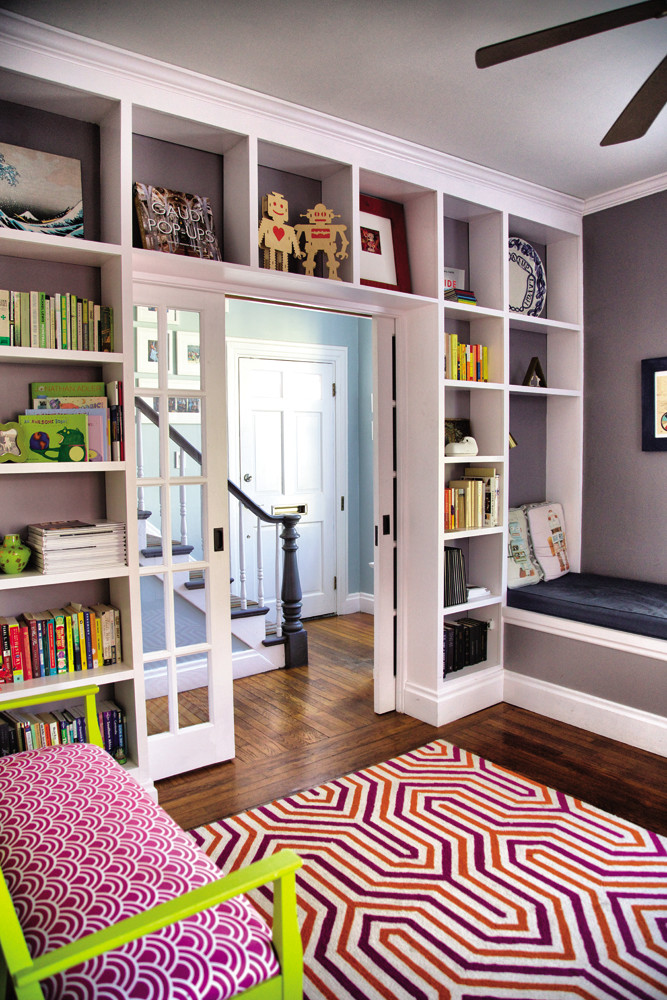 The April issue of The Bay Magazine, on newsstands now, features my monthly home feature. For details and more photos, pick up The Bay this month or CLICK HERE. PHOTOS BY MIKE CEVOLI
By Andrea E. McHugh

The coveted historic home plaque outside Joe and Alana Hearn’s nearly 150-year-old Newport home looks stately and dignified, until you take a closer look and realize the elegant font reads: “HHR House, c. 1876, America’s First Discotheque.” It tells you just about everything you need to know about the family that made this place a home.

“It was wreck, badly in need of attention,” is how Joe describes the condition of the home when he bought it 12 years ago. “None of this was the house that I bought,” he says, looking around at the playful-meets-polished, but positively unpretentious surroundings.

Despite being “a dump,” Joe, single at the time, saw the home’s great potential. Nestled in the core of Newport’s sought-after Historic Hill neighborhood, the 1600-square-foot diamond in the rough was a two-family abode just steps from shops, restaurants and legendary landmarks including the Redwood Library and Athenaeum (the oldest lending library in America still in 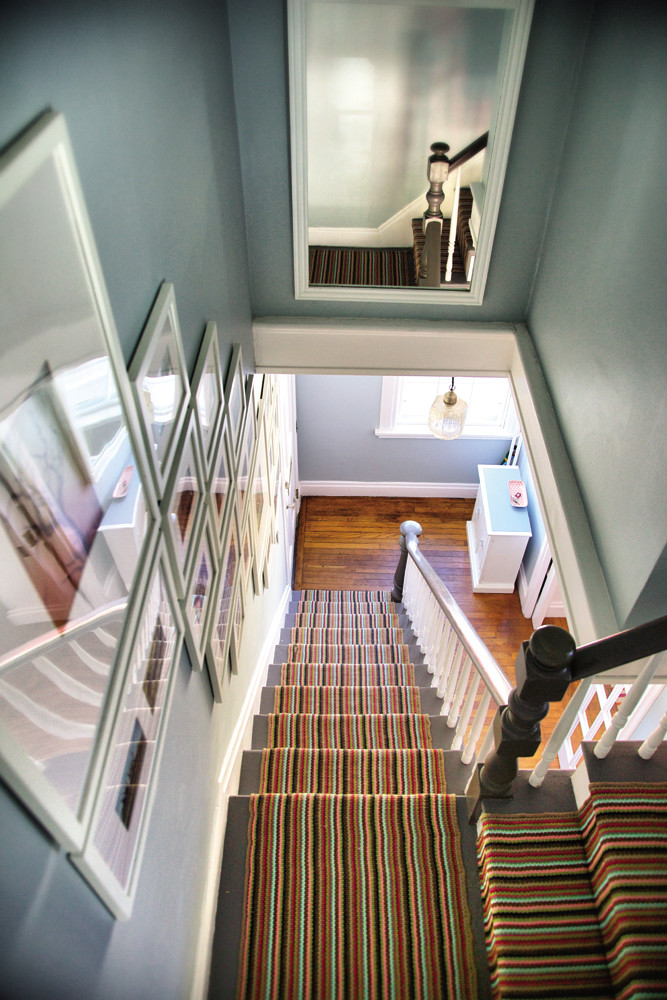 circulation), the Newport Art Museum and the bustling waterfront.

“At the time, there was no sense of occupying the whole thing… I only needed the downstairs,” explains Joe. A few years later, he and Alana started dating and eventually, the relationship grew more serious. Still, the two lived just fine on the cozy but comfortable first floor. Plus, they were spending much of their time in New York City, where Alana, a third generation Newporter, still works today.

But there’s nothing like an impending life-changing milestone to motivate a person. “After we were engaged we were like, ‘Why don’t we live in the whole space?’” They turned to friend and Newport-based architect Spencer McCombe of Cordtsen Design Architecture for some advice, and to Joe Carey of Carey Floors, also in Newport, to breathe new life into the floors throughout.

Though he had already reconfigured much of the downstairs, including the kitchen and bathroom, Joe says much more needed to be done, starting with the ceilings. “The demo of the old ceiling was just me just grabbing it with one hand and pulling down – the whole thing came down,” he says. “It was a total, total gut job.” Most of the ceilings throughout were opened, replaced or reconfigured. The result was metamorphic. “The biggest difference in the house now is volume,” Joe explains.

The contemporary kitchen, where the removal of the original ceiling offered an entire new vibe, features white cabinetry that is juxtaposed with punchy Merlot-hued walls. Sleek, stainless steel appliances, including a chef’s grade six-burner gas range, hints at the couple’s passion for dishing up savory meals – and it’s not just the oven that gets hot in the kitchen.
“We both love to cook, but we both are used to getting our own way professionally, and as our relationship started, the kitchen was a battleground,” jokes Joe.

“We love to have people over; we love dinner parties,” adds Alana. “And of course, in every house, people gather in the kitchen.” Because of the kitchen’s magnetic force, the couple ensured the space had an open layout and visual dimension, punctuated best by ceramic tiles designed by South African born, Sausalito-based artist Ruan Hoffman. “We have some other pottery in the house by him,” says Alana. “I’m just a really big fan of his work. I think it’s really cool.”

“Cool” seems to be a theme throughout, though understated in the dining room. The most traditional room in the house, the space is furnished with a decades-old dining room table, chairs and sideboard that belonged to Alana’s grandparents. “It was our wedding gift from my 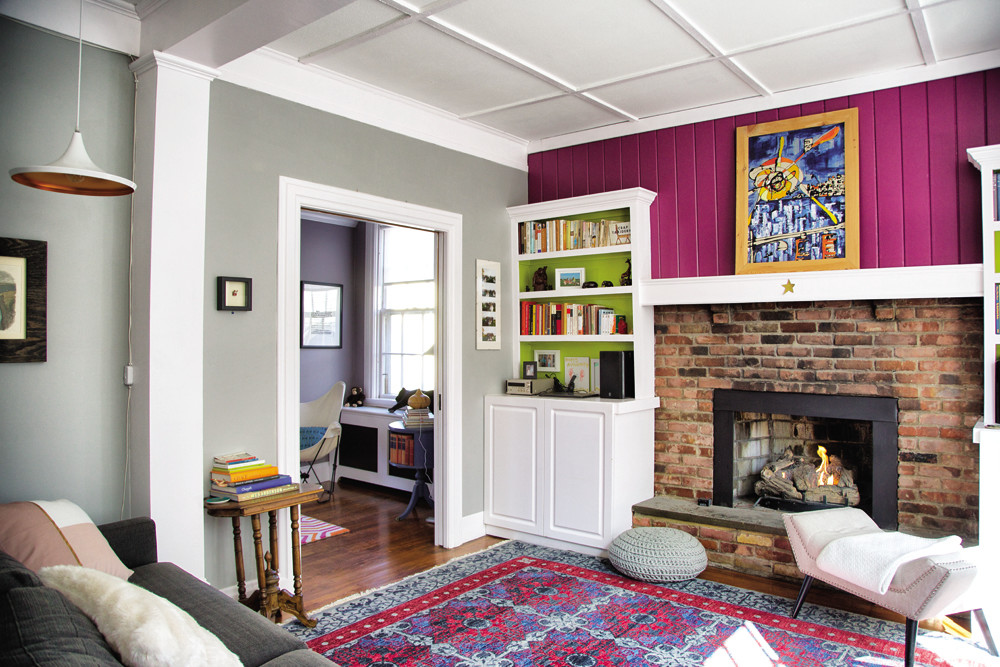 aunt,” she says fondly. “It’s really special.” The couple continues the set’s legacy by hosting their own gatherings of food, family, friends and fun here, even hosting up to 14 guests around the table one time. Though classically furnished, the place stops short of stuffy as a colorful tea set (another Ruan Hoffman creation) graces the sideboard, a contemporary piece by RISD artist John Hung Ha hangs on one wall and an oil on canvas piece by Newport’s Sue McNally on the other, and a collage of just a few snapshots from the couple’s global adventures building homes for Habitat for Humanity all draw you in. A bubble glass orb chandelier illuminates the room – and reminds diners that even in this space, expect the unexpected.

In the bathroom, a funky, metallic interpretation of the iconic Great Wave Off Kanagawa print by Japanese artist Hokusai takes up most of the wall. It’s actually wallpaper by Brooklyn-based Flavor Paper that has been subtly mounted on a separate core piece that attaches to the wall. “We were so afraid if we ever move we couldn’t take it with us,” says Alana.

The same out of the box thinking is what prompted the reinvention of the only downstairs bedroom into a funky den. Joe’s former closet was transformed into Alana’s compactable home office. Opposite is a wall of built-ins Joe built and a window seat that serves as a comfortable reading nook. An apropos weathered sign that says “Read” was one of those rare treasures only old homes seem to offer up. “When we demoed the ceiling, we realized the structure of 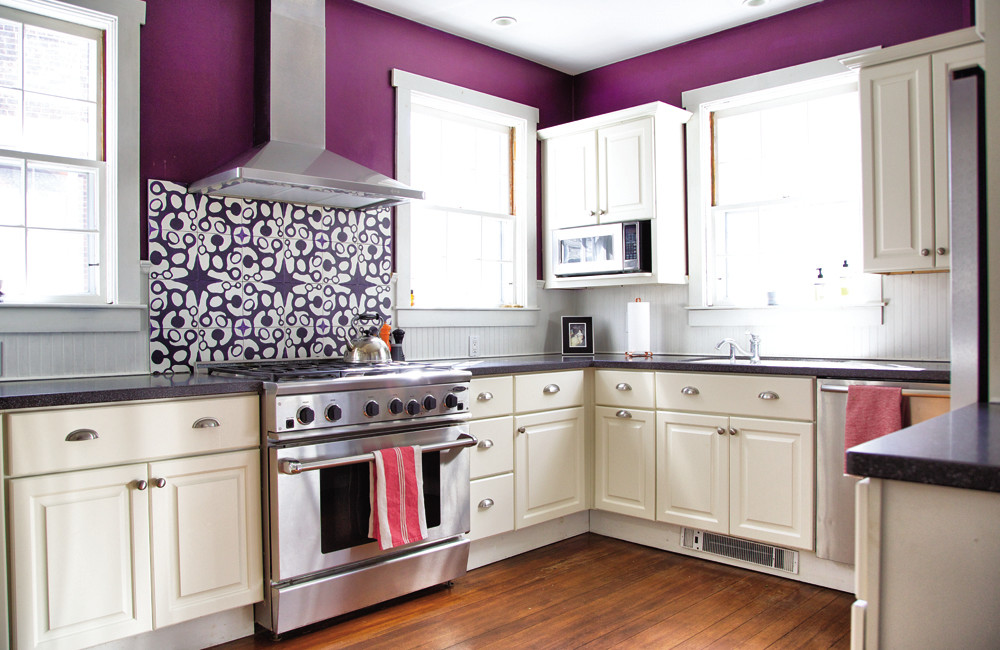 the ceiling was actually a sign that was split and cut into boards. We took the pieces out into the backyard and laid them out. It said, ‘Goff’s Reading Room.’” From the mid-19th century through the mid-20th century, reading rooms were indeed reading spaces, but also served as social clubs, gentlemen’s clubs and, in some instances, speakeasies. The Hearns looked for any history on “Goff’s Reading Room” with the Newport Historical Society but it was a fruitless endeavor. Regardless, the reclaimed sign makes a fitting, artful piece of the past.

While Joe is the builder, Alana is the eye. After he taught her how to use a spray gun, Alana went on a tear, salvaging long forgotten pieces from the basement and other sources. More than a dozen colorful finds are peppered throughout the home. “The gun was really a game changer,” she says.

But the biggest transformation may be the upstairs, where they converted the one-time apartment into a spare bedroom and master suite. And there was one other tiny room up there they needed to address. Today, it is the nursery for their newest addition: baby Josephine. “She loves it here,” says Joe of her charmingly whimsy nursery. It’s safe to say she’s not the only one.