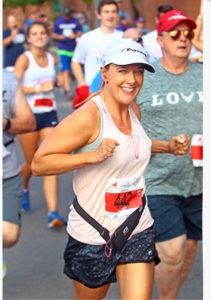 Family, work, social commitments, minimal free time, summer adventures/demands in Newport — I could think of a thousand reasons not to sign up for a road race in July — the least of which being the years it’s been since I gathered with thousands at a starting line (and in less than peak running form). But I could think of a few great reasons to sign up for  the Run to Home Base presented by New Balance:

It raises awareness and funds for critical care for military veterans and their families. It starts and ends at Fenway Park and short of making the Red Sox roster next spring, this would likely be my only chance to run across home plate. I owe it to me. I owe it to me to challenge myself, to harness the positive energy that comes with setting a goal and meeting it.

So I signed up — this rusty, slow running (“ambitious jog” might be more accurate…), perennially busy, perpetually wondering-what-to-make-for-dinner wife and mom with seven year-old sneakers — signed up for a race with only 5 weeks to train, zero familiarity with the course and woefully outdated necessities.

Here’s what I learned:

1. Living in Newport is a gift. So is running here.

I joined the Newport Run and Chug Facebook group a year or so ago with the intention of actually running at some point (the chugging part came more easily). Never did. But a friend who had nine Runs to Home Base under his belt suggested I go the Thursday before the race. The group partnered with our local November Project for a 6k that evening and there were a number of fellow first timers there, including a girl I ended up running with from Massachusetts. Our course took us from The Fastnet, up Broadway, down Bliss to Eustis, around the reservoir to Easton’s Beach, up Memorial, right on Bellevue and a loop around Touro Park to end at the Colony House. The girl from Massachusetts repeatedly commented how beautiful the sights were along the way. She was right, I just had’t taken a moment to look around.

First things first: new kicks. None of my existing sneakers were road ready. Most running shoes are designed to last about 400 miles, which sounds like a lot, but that’s only about 7.5 miles a week per year. New Balance’s FuelCell Propel sneaker was the perfect fit for me — it’s 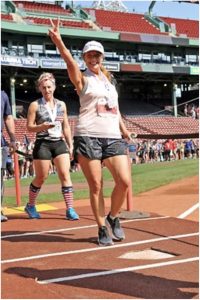 incredibly lightweight, has solid cushioning and features FuelCell foam technology which delivers a propulsive feel to help drive you forward. I love ‘em.

Running in July is no joke, so I also looked for super-light tops like New Balance’s Q Speed Breathe tank (which is on sale right now). The moisture-wicking mesh offers maximum breathability, there’s some subtle reflective details (particularly appreciated on early morning and late evening runs) and the soft pink all-over jacquard pattern is well, pretty. When it came to bottoms, I usually lean towards crops or capris; only shorts when it’s super hot. Late July was super hot. So I trained a number days in New Balance’s compression capris but opted for running shorts on the big day

Whether it’s barre, high intensity spin, TRX, CrossFit, running or even a brisk walk, half the battle is mustering up the time and energy to do it. Once you’re moving, it gets easier. Show up for yourself. Show up on the mornings when you’re out well before sunrise. Show up when it’s been long day, you’re exhausted and just want to watch a DVR-d episode of Southern Charm (I can’t quit you, Shep). Show up when it’s a light drizzle and you think “running in the rain is ludicrous!” but it’s really barely more than a mist. Show up for yourself, because I’m wiling to bet you’d show up for anyone else you love.

4. Some days are better than others.
Maybe you wake up and knock out five miles in record time, keeping the beat to a sick play list. Maybe 15 minutes into a workout you find yourself struggling. Some days you’ll slay. 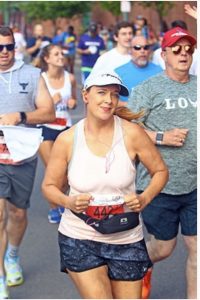 Others you’ll slog through every moment. It’s okay. Be kind to yourself.

Before I even crossed the starting line, I knew being a part of the Run to Home Base was a good call. The cause, the adrenalin, the magic of walking into Fenway shortly after sunrise… Admittedly, when I affixed my bib number to my tank, I thought for a minute, “Are you really ready to do this?” But the better part of me quickly answered, “F*ck yeah, you are.” I told my four year old the night before I would not win (had to break that to her gently), but I promised to do my best. I told her that plus believing in myself meant I had already won. Nineteen years ago I ran the Marine Corps Marathon, in honor of my father. I came in 13,127th . Out of 30,000. That’s no great shakes (but I still got the medal!) but as far as I was concerned, I ran through the victor’s ribbon. For some people, a mile is a mountain. For others, their success is measured in 6 minutes miles x 26.2. No matter which, you can do anything, one step at a time.

Disclaimer: I ran with the New Balance team in participation in the Run to Home Base.