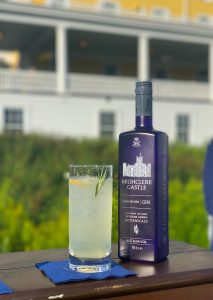 If you’re a fan of Downton Abbey and have seen the preview, admit it — it gives you all the feels.

This week, our long awaited reunion with the Crawley family and their intrepid staff finally unfolds with the release of the popular British historical period drama’s feature film (Jane Pickens Theater is having a sneak preview on Thurs., Sept. 19th in advance of its national release Friday, then will show it Sept. 20-26). The plot revolves around a royal visit from the King and Queen of England, which unleashes scandal, romance and intrigue (trifecta!) that will leave the future of Downton hanging in the balance. (Fans will remember that Shirley MacLaine guest starred on the series as Lady Crawley’s mother, Martha Levinson, in season four — arriving at Downton after summering in Newport). 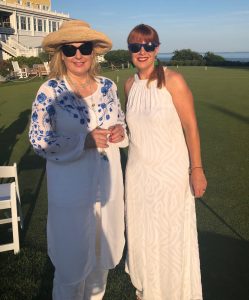 On the croquet court with Lady Carnavon

Like the entire series, the film was written by Julian Fellowes with the impressive real-life Highclere, a 5,000-acre estate is in Hampshire, England, serving as the “the face” and primary filming location of Downton Abbey.

A few weeks ago, I had the good fortune of spending time with Lady Fiona Carnarvon of Highclere Castle. Fiona, the eighth Countess of Carnarvon, opens the doors to the family’s ancestral country seat to visitors at certain times of the year for castle tours, afternoon tea and events along with her husband George Herbert, the Earl. She’s written books and granted interviews but I was meeting her to talk about the release of Highclere Castle Gin. 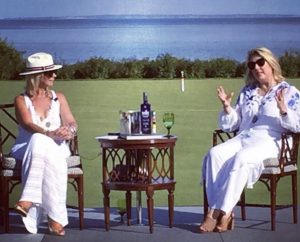 Spirits entrepreneur Adam von Gootkin, whose first brand partnership with Lord & Lady Carnarvon was a cigar line (cigars and gin — a sensible combination), told me the Lord and Lady wanted the flavor of the gin to be authentic; to truly encapsulate terroir of the estate. So they turned to Highclere’s botanical gardens, incorporating its lavender and juniper while infusing lime flower and orange peel to offer a clean, 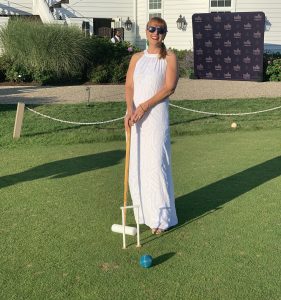 refreshing finish. I savored the spirit in a classic gin & tonic, garnished with a sprig of fresh rosemary and a lemon twist.

Adding to the spirit’s lore, Adam says the gin is produced in England’s oldest gin distillery in an antique copper still which dates back to the 1800s.

So, as you countdown the return of your favorite audacious post-Edwardian aristocrats, a toast with Highclere Gin would be apropos.