Jamestown, Newport’s westerly neighbor, is known for its rural vibe, charming village and vibrant sailing community. I’ve written about Rhode Island homes for various magazines for 17 years (which makes me sound old) and it’s always a treat when I get a peek inside a home I’ve been curious about. When this assignment from SO Rhode Island Magazine rolled in, I was delighted. The homes on Jamestown’s Shoreby Hill are synonymous with Jamestown itself, so please take a read and “step inside” Potter’s Cottage. 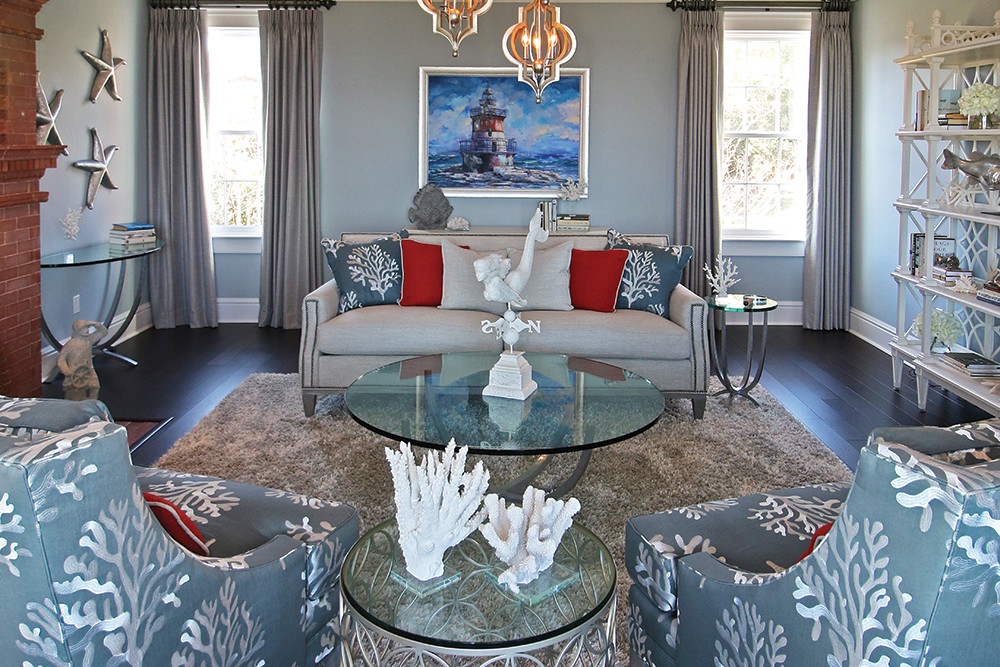 Ask any longtime Jamestowner about the significance of the Shoreby Hill Historic District and you’d best be prepared to sit a little while. Perched on a prominent hillside that today is listed on the National Register of Historic Places, Shoreby Hill was farmland for more than two centuries. It wasn’t until 1895 that a Boston architect was enlisted to design a residential neighborhood there to accommodate wealthy families who wanted to summer at the idyllic locale overlooking Narragansett Bay. Three years later, Jamestown’s first subdivision, consisting of 10 elegantly built, well-manicured homes, was recorded.

Two years ago, Kim Peterson of KEP Interior Designs was contacted by new owners of one of the first homes built on Shoreby Hill. Potter’s Cottage, also known as the Red House (which today is still, indeed, red) was built between 1898 and 1899 for Margaret Potter, daughter of an affluent St. Louis banker, and her husband Henry. The house would later be owned by well-known summer colonist Josephine Kern Dodge and, eventually, the famed Wharton family of Philadelphia.

“They refer to this house as a cottage,” says Peterson. “It’s anything but a cottage.” She was humbled to work on a home with such significance, she explains: when she works on a historic home, it’s important to respect and honor its past. “And it’s exciting for me to be part of the future of such a house.”

It was architect Karl Sauerbrey of West Greenwich who first reached out to Peterson after he was knee-deep in a major  renovation of the home. Over the years, various smaller renovations and modifications had been made to Potter’s Cottage, which left the home haphazard and fragmentary. Sauerbrey knew that while he could design the layout of the rooms, Peterson was the perfect person to execute the look and feel of the place, as it would be difficult for the homeowners, who live out of state, to stay on top of every design decision offsite.

When Peterson first met the homeowners, there was an instant connection. “We met at the house and hit it off right away,” she says. It was only one of a handful of times the designer and her clients would actually be face to face throughout the project. But they all agreed that the house was special and that its legacy needed to be celebrated. “We wanted to preserve the historic aspect but bring it current with all of the amenities,” explains Peterson. “Even our design theme became ‘keeping the old and making it new.’”

After a century-old claw-foot bathtub was found in the attic, for example, Peterson had it sent out to be fully restored. Today the tub is in a second-floor bathroom (though it needed a crane to get there). Another whimsical detail was the old servant bell system, used to summon servants for duties in the family area of the house. “Every bell made a different sound and servants knew which family member was ready for their bath and at what temperature,” explains Peterson. Though not operational, bells remain in the various rooms of Potter’s Cottage today. An original fieldstone chimney takes center stage in the main living area of the first floor.

By far the most significant change to the home was relocating the kitchen from the backside of the building to the front.

“It had these small windows and after much to-do with the Historical Society, we were able to put in sliders. They go out to the front/side porch,” says Peterson, and afford captivating views of the Newport Bridge.

Technology played a big role in finishing the “traditional coastal” aesthetic of the home. FaceTime, emails, and overnight shipping of samples kept Peterson and the owners in constant contact. At first, Peterson says she was in touch about “every single thread” and “every doorknob,” but soon a synergy developed and “we were down that path together and our minds thought alike,” says Peterson, giving her more oversight of what she calls “the project of a lifetime.”

Read about this and other Rhode Island homes at sorhodeisland.com/home.