It’s going to be a socially-distanced summer and whether you’re carefully expanding your inner circle or staying close to home, there are so many good books out there to enjoy on the beach or snuggled in your reading nook. Perhaps more than ever, as demonstrations around the world are calling for racial justice, it’s important to point out that the publishing industry is one of many reckoning with its racial biases, including pay inequality (both on staff and when it comes to advances and more – checkout #PublishingPaidMe), lack of representation and other discriminatory behaviors. It’s essential to amplify more black writers in every genre, from autobiographies to historical fiction to prolific novels. Below you’ll find some of my most recent recommended reads including two by Black female authors (I’m currently looking to read more from this slideshow on Oprahmag.com and this list from NPR): 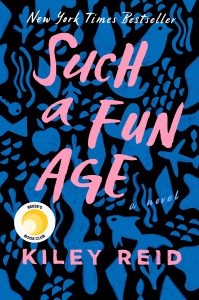 Such a Fun Age by Kylie Reid

Released at the end of last year, this book is having a moment. For me it had a lot of moments – certainly tired moments as many nights it was well past midnight when I’d tell myself to put the book down. It’s a captivating story of race, privilege and class in America centered around Emira Tucker, a 25-year-old Black woman who is accused of kidnapping the child she babysits. The child’s mother, the Stepford-esque Alix, takes a deeper interest in Emira after the incident – an interest she believes is well intentioned but is in fact, self-serving. Enter Emira’s new boyfriend who unbeknownst to her, has a past full of complicated layers that are slowly peeled back. Told through alternating perspectives, it’s an easy read but with highly complex with flawed characters, boundaries that are overstepped and thought provoking themes throughout including what it means to be an ally. 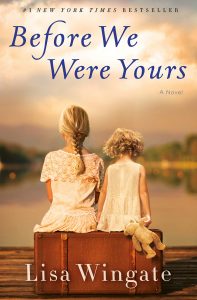 Before We Were Yours by Lisa Wingate

This novel is incorporates one of America’s most infamous and shameful scandals. In the late 1930s, a Memphis-based adoption organization kidnapped and sold impoverished children to wealthy families all over the country. This story is about 12-year-old Rill Foss and her four younger siblings who were raised aboard their family’s Mississippi River shantyboat (I never knew entire shantyboat communities existed, mostly in poor areas in the South along riverbanks, usually near industrial towns and cities) until they were illegally sent to the orphanage for profit. The story bounces between that time and present day, when federal prosecutor Avery Stafford returns home to tend to her ailing father, a prominent state senator, and starts to uncover family secrets that bring the scandal of yesteryear to the forefront.

The Hate U Give by Angie Thomas

I admit, I knew about the movie version of this story before I knew about the book. So naturally, when I learned more, I wanted to read the book first (it was a NYT Bestseller after its 2017 release). Though it falls under YA, and I am not a YA, I stayed up well past my bedtime for a week to dive into the character of  16-year-old Starr Carter, who was born and raised in Garden Heights, an inner-city neighborhood, but attends a predominantly white private school. After witnessing the senseless death of her close friend at the hands of a white police officer, Starr is more aware than ever of the two worlds she straddles and the palpable socioeconomic inequities and systemic racism that plague the country and her community. She keeps her secret until she cannot longer keep silent. After I read the book, I watched the movie which was recently released on HBO. It was really good (and I know it’s cliché) but Angie Thomas’s writing is so hypnotizing and captures so much detail, I’d recommend reading the book first. (2021 will welcome Concrete Rose, Thomas’s prequel to The Hate U Give which will explore Garden Heights 18 years prior.) 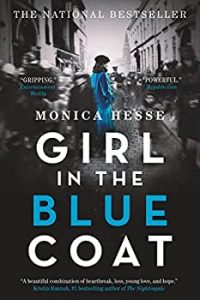 Girl in the Blue Coat by Monica Hesse

Would I really have a “what I read” book list without a WWII-era entry? Of course not! This book first stood out to me as it takes place in Amsterdam in 1943, and while I’ve read countless works of historical fiction from the era that unfold in England, France, Russia (reading The Bronze Horseman now!) and Germany, I’ve never read any that take place in the Netherlands. Prior to 1940, the Netherlands remained neutral in WWII until invaded by Nazi Germany in May of that year. This story revolves around Hanneke, a young woman who unbeknownst to her family, deals in simple black market goods (cheese, meat, kerosene). One of her customers asks for her help finding a Jewish teenager who disappeared from the hiding spot in her home. Despite her fears, Hanneke’s search aligns with the Dutch resistance in her quest to find and save a girl her own age. It is a story of courage, tragedy, unforgettable characters and the enduring human spirit 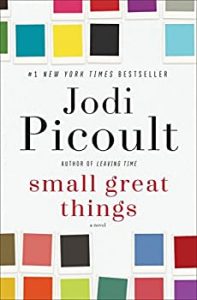 This isn’t a new release – more than a million copies have been sold, but I was looking for book recs during lockdown and a friend suggested this  and all I can say, is thank you (and that one of my micro-book clubs has chosen it for our next selection). Ruth Jefferson, an African American labor and delivery nurse at a Connecticut hospital with more than twenty years’ experience, has to make an unenviable, split-second, life-altering decision when the newborn son of a white supremacist couple has a medical emergency. The plot that ensues intersects prejudice, class-privilege, race and justice in a spellbinding story. 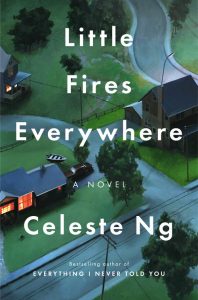 I’ve left this entry for last as I cheated a bit (hence the asterisk). Based on more than one recommendation, I watched the adapted series on Hulu starring Reese Witherspoon and Kerry Washington instead of reading the book. (I was going to download the audio book but I watched the first episode and I was hooked). That seems to be a popular consensus. The plot brings together two families: the “matching-tartan for the Christmas card photo” Richardson family and Mia and Pearl Warren, a mother daughter duo who are new to what’s dubbed a “progressive suburb” outside Cleveland. Mia and Elena are polar opposites but share the commonalities of motherhood, past secrets, parental pressure and complex family dynamics. The characters’ plot lines intertwine in ways you may not see coming. Read the description on Goodreads for a complete synopsis. If you don’t subscribe to Hulu, it’s worth activating a 7-day free trial for Little Fires Everywhere alone. (Then watch Mrs. America. Then Killing Eve. You’re welcome.)

Fellow bookworm? I love to chat books via DM on Instagram @newportstyle.