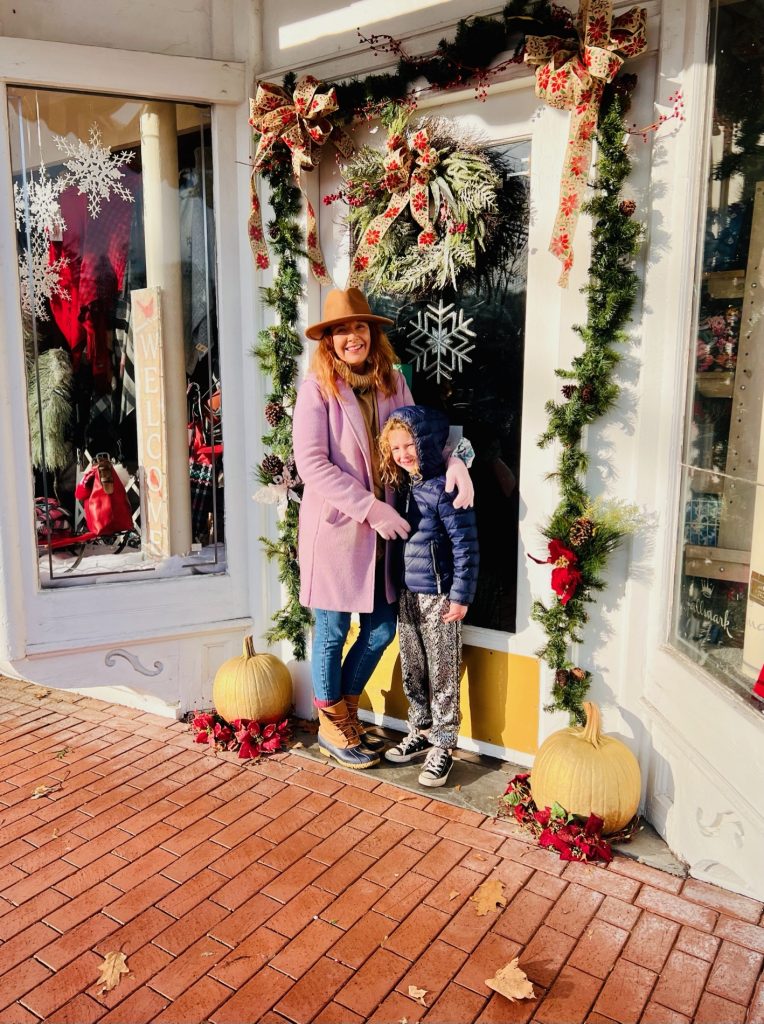 You know that feeling when you’re craving a weekend getaway that’s far enough from home that it feels like a world away but close enough you don’t spend half the time on the road — and you can do it all for less than a tank of gas?

While Newport is magical during the holiday season, my family and I wanted to explore somewhere new to us that still evoked small town charm with simple pleasures wrapped in Christmas spirit. So we packed some weekenders and headed to Dutchess County, New York.

Though I was born in the heart of New York City and in my post-college years lived in Westchester for a spell, I never ventured to this southeastern nook of New York State. It’s between the Hudson River on its west and the New York-Connecticut border on its east (about halfway between the cities of Albany and Manhattan), and had I ever nodded off on one of my many Metro North rides, I would have found myself in this delightful part of the Hudson Valley.

We made our home for the weekend in the charming village of Pawling, arriving in the late afternoon just as magic hour was casting a soft orange hue across the town’s century-old homes and the swath of Christmas lights throughout town began to glow.

Just before the sun’s final decent, I headed to Millbrook Vineyards and Winery perched atop a 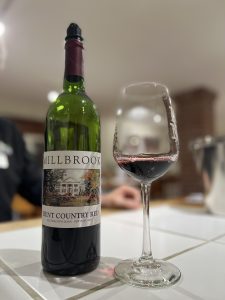 bucolic hilltop overlooking it’s 130 acres, nearly 40 of which are planted with grapes against the backdrop of the Catskill Mountains. Housed in a restored Dutch hip daily barn, “the Hudson Valley’s flagship winery” offers a spacious tasting area, designated reserve wine tasting room for Millbrook’s finest Estate Designates, and retail area for wine, gifts and local artisan food stuffs. I was hesitant when they suggested I try the 2020 Dry Riesling Proprietor’s Special Reserve first as Riesling is perhaps my least favorite wine, but it was exceptionally dry and had a soft finish, so I was easily won over. I was also pleasantly surprised by the “Hunt Country Red” as the bottle was beautiful but the wine sounded rather ambiguous, however the merlot-cabernet franc-Syrah blend was wonderfully balanced and seemingly an ideal wine to please the whole table (note: Christmas party hostess gifts done!). As the vineyard sources from their own vines as well as growers on Long Island, the Finger Lakes and Vista Verde Vineyard in California, this expansive winery has a beautiful portfolio.

To know me is to know I love the first meal of the day. From croissants to crepes to bottomless 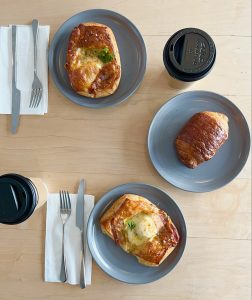 mimosas brunch, I’m all in. After a restful night’s sleep at the cozy Station Inn Pawling (with one of those indulgent beds that could easily lure you into a delayed start of your day), we headed around the corner to the corner to the Pawling Bread Co., where the wafting aroma of freshly-baked bread and brewing coffee greeted us.  Against the contemporary white subway tile, a purple neon sign glowed “labor of love,” which I learned from owner/baker Cynthia Kinahan was more than just décor. The Malaysia native started out with making sourdough bread by hand in the basement of her home to sell at the Pawling Farmers Market. When she saw how customers would most often enjoy her goods right away, lingering about and chatting with other customers, it was clear she was not only baking bread, she building a community. That same community came together to make a brick-and-mortar bakery café happen for Cynthia and nowadays, her sourdough loaves, croissants, brioche and cinnamon buns often sell out by lunchtime. With a full day ahead of us, my husband and I both savored the heavenly egg and cheese pastry baked into the flakiest croissant dough, while my little one devoured pain au chocolat. Armed with another round of coffee to go, the day awaited.

The Walkway Over the Hudson State Historic Park in Poughkeepsie was our first stop, about 30 minutes away. One of the most anticipated attractions of our getaway, we wanted to 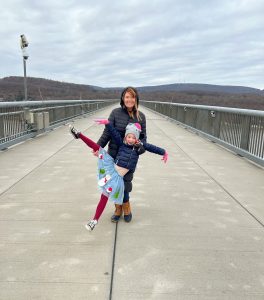 experience the world’s longest elevated pedestrian bridge, spanning 1.28 miles over the Hudson River, and it did not disappoint. While thrill-seeking isn’t always the top of my agenda, the Walkway wasn’t intimidating (maybe a little when you look down 212 feet), although I skipped the glass-enclosed elevator that takes visitors from the bridge to the base of the bridge 21 stories below. We didn’t walk the entire 1.28 miles to the Town of Lloyd on the other side, but we did walk to the center of the span where my little one decided it was a good place to create a dance routine. The Walkway Over the Hudson is free as is parking (when it’s particularly busy in the summertime, overflow goes to nearby fee-based parking lots ).

HAIL TO THE CHIEF 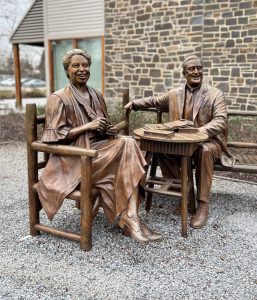 One of Dutchess County’s claims to fame is Hyde Park, the Franklin D. Roosevelt National Historic Site where you’ll find nation’s first Presidential Library, Springwood; home of the longest-serving president of the U.S. where he was born and raised; the final resting place of the president and his extraordinary wife, Eleanor; a stunning horse stable and miles of trails. Our schedule didn’t allow time for a ticketed tour of the home but we did explore the visitor’s center, stables and the grounds and learned so much more than we ever know about the 32nd president, Eleanor, their family and the administration’s accomplishments.

When you live in Newport and have written about Newport for almost 20 years, you come to know a lot about the Newport Mansions and other mansions of the Gilded Age. So when we had 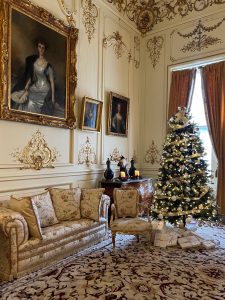 the opportunity to visit the Mills estate at the Staatsburgh State Historic Site, I was excited but also, my bar is set pretty high. When making our way up the grand hill to this Greek Revival style Beaux-Arts mansion, it gave Marble House vibes. Walking in, the mansion was awash in Christmas finery, right down to a gleaming bar cart with a newspaper from 1912.

Beautifully maintained and meticulously presented, my favorite part was a small exhibit space where I learned more about the private lives of the staff. Mr. Mill’s butler for example, Frederick Thompson, retired to Newport with his wife and children after his service to the Mills family, settling in a home on Rhode Island Avenue. The footman (I know, this all so Downton Abbey…), Herbert Stride, married the butler’s daughter, Daisy. Then the couple both worked for a Vanderbilt and after service, moved to Eveherdee in on Gibbs Avenue. 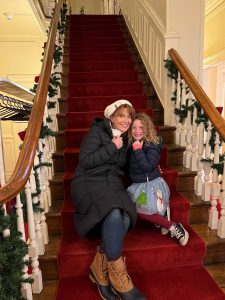 Our next adventure was to Rhinebeck, which I had heard of but had no idea it would feel like walking in a Hallmark Christmas movie! We arrived just before the town closed off their streets to fully embrace “Sinterklaas,” a holiday tradition dating back nearly three decades. This full-day of festival activities with live music, dancers and performers, crafts and stories for children and holiday hijinks culminates in the Children’s Starlight Parade. As we sipped hot apple cider and strolled down the town thoroughfare taking in the antics of street performers, musicians and a twerking polar bear (a HUGE hit with the kids), it was easy to bask in the simple joys of the holiday season. We perused the finds at local quaint shops and as is practically sacrosanct, stopped by Samuel’s Sweet Shop, an itty-bitty candy shop with great coffee drinks owned in part by glitterati Paul Rudd and wife Julie, Jeffery Dean Morgan and Hilarie Burton.

There’s something about the colder months in quaint Upstate New York and New England towns that make me crave a simple pint of a locally-made, hoppy IPA, so a stop to the Hyde Park Brewery was in order. Makers for craft brews for a quarter century, the Rakarillo IPA I sipped while enjoying a lite lunch was the perfect pairing to some well-earned pub grub. 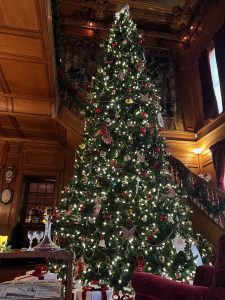 We returned to Pawling in time to gather ‘round at the gazebo adjacent to the train station as schoolchildren sang Christmas carols and dozens of trees were illuminated for the night. As fate would have it, the local Chamber Of Commerce was hosting a Champagne Stroll – folks collect a champagne flute and shopping map of the local establishments offering special promotions that evening, where shopkeepers serve bubbly while you shop. (Here’s hoping Newport picks up this tradition!)

Dutchess County is a delightful destination and I’m thrilled I was able to experience it in the “off season.” It was the perfect opportunity to visit when you get a true sense of the day-to-day of the people here and the places that make it extraordinary – with fewer visitors and more time to marinate in the beauty of it all.

Thank you to Dutchess County!

Disclosure: Dutchess County Tourism sponsored this trip but all opinions are my own.

Previous Post: « Straight From Wales: Taking the New Aston Martin DBX For a Spin Around Newport
Next Post: Three Reasons to Visit The Liberty Hotel This Holiday Season (Hint: Upside Down Christmas Trees & Curling with Cocoa) »