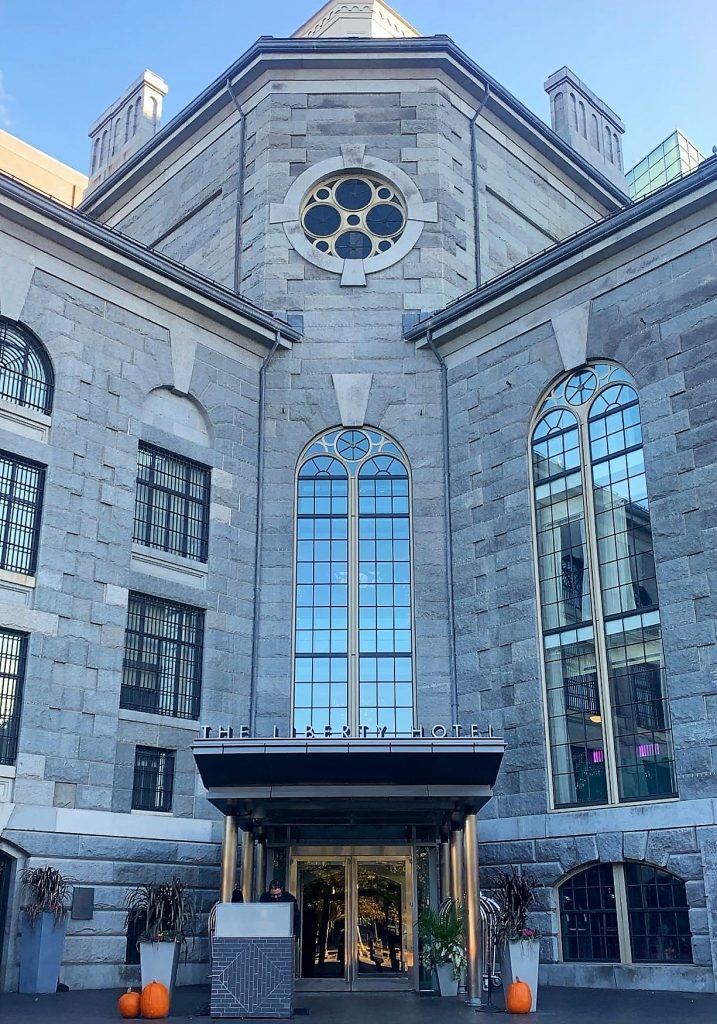 I recently had the chance to enjoy a quick weekend getaway at The Liberty Hotel in the heart of Boston’s vibrant Beacon Hill neighborhood and it was the idyllic local to feel far from home, recharge the batteries personally and professionally, and immerse myself in the holiday spirit.

Just ninety minutes door-to-door from Newport, you can’t miss The Liberty Hotel’s unique all-stone façade. Originally built in 1851, the building was one of the best examples of the “Boston Granite Style” of the mid-19th century — only this building had a singular infamous purpose at the time: it was the Charles Street Jail.  After nearly a century and a half of housing some of Boston’s most notorious criminals, the jail closed in 1990.

Bought by Mass General, hospital ownership required the next reiteration of the building, a 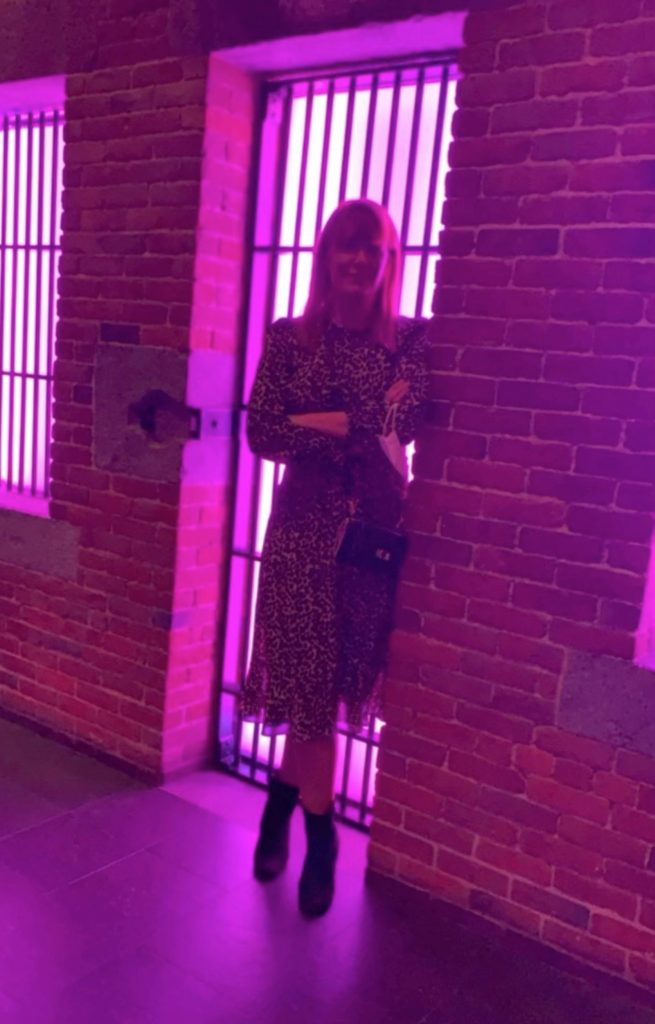 National Historic Site, to preserve its primary architectural elements. Today, the luxury Liberty Hotel capitalizes on the building’s historic past boasting 298 imaginatively re-invented rooms and suites with sweeping views of the city skyline and Charles River. Soaring 90 feet into the sky, the jail’s central atrium was beautifully preserved and features the building’s trademark arched windows and historic catwalks. The preserved jail cells within the hotel restaurant and wrought-iron work on the windows are just two examples of preservation, and the former inmate exercise yard (“The Yard”) is now a private, beautifully landscaped courtyard.

So, here are three reasons why you’ll want to make a Liberty Hotel getaway part of your holiday break plans: 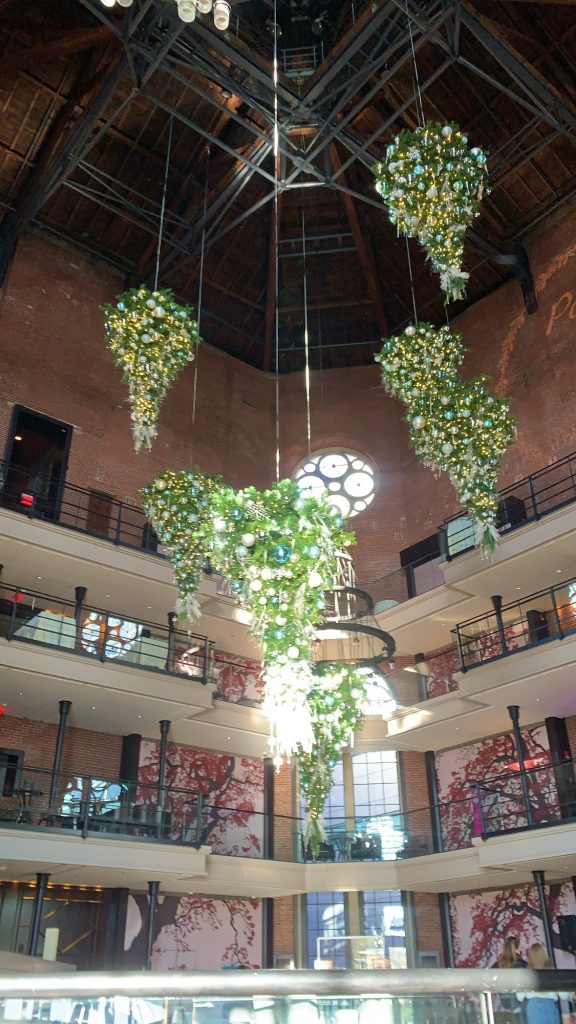 1. Aerial Christmas trees. The pièce de résistance of The Liberty Hotel’s holiday finery are the upside down Christmas trees suspended from the soaring lobby’s chandeliers. The trees glow with 1500 holiday lights, 730 ornaments, and 60 yards of bronze sheer ribbon. From personal experience, they are best enjoyed with perched in a lobby wingback white sipping prosecco.

2.  Curling in the Courtyard. Yes, you read that right! Bundle up and brave chilly temps (although, frankly is hasn’t been uncomfortably cold just yet – yay!) for an unforgettable winter curling experience on the Liberty’s private outdoor courtyard, The Yard. Guests are assigned a “curling concierge” who will explain the game and how to use the equipment, will serve food and beverages, and can assist with any other needs/questions. Your reservation includes soul-warming chocolate, but if you want to upgrade, food/beverage packages can be added on (clink, clink!). Think: 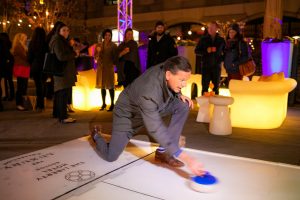 crispy shrimp tempura with spicy Japanese mayo, short rib of beef and Manchego empanada and signature cocktails like Ron Zacapa 23 Rum with New England mulled cider or the “Great White North” made with Crown Royal, coffee and whipped cream. Available Monday through Friday, reservations are available in two-hour slots for groups to reserve the entire curling courtyard to enjoy and learn the sport.

3. Feeding body and spirit. A destination onto itself, (my traveling companion literally never left the hotel as there was nothing they could want beyond those lux granite walls!), The Liberty is home to Scampo, a culinary powerhouse created by legendary Boston-based Chef Lydia Shire (more on that later); Clink, where we savored an unbelievable brunch; Alibi, set in the jail’s old “drunk tank” so a rather apropos to get an espresso martini nightcap; and of course The Liberty Bar in the lobby which never seems to slow down. We also adores the Catwalk, a guests-only experience on the jail’s actual former catwalks encircling the rotunda with aerial views of the Christmas trees and high-traffic atrium. 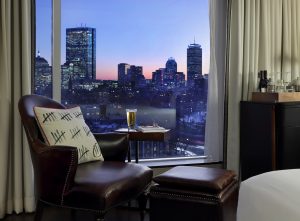 There are 298 rooms at The Liberty and each feature playful nods to the hotel’s infamous past, from framed skeleton keys and safes as décor and storage, and doorhangers that trade the banal “don not disturb” message for “solitary.” Each room offers panoramic views of the iconic Boston skyline and The Charles River framed by floor to ceiling windows. And when it comes time to rest your head, you’ll do so in a lux bed with appointed with imported bed linens, luxurious Molton Brown amenities. Frankly, being in solitary here is a damn delight.

Make Scampo your dinner destination. Insider’s tip: reserve seating at the back bar which will give you a front row seat to the kitchen activity. James Beard award-winning chef Lydia Shire masterminded a menu anchored by Italian-inspired cuisine but drawing on flavors from the Mediterranean and Middle East. We started with the highly-recommended fresh fig, chanterelle and sottocenere truffle cheese pizza (heaven on plate). Our entrees included native swordfish with spicy shrimp harissa meatballs and cool Persian cucumber salad as well as chestnut flour lobster ravioli with candied chestnut. Perfection.

A nightcap was in store at Alibi, the old “drunk tank: of the original jail which today, is peppered with the mug shot of famous musicians (David Bowie, Mick Jagger, Johnny Cash and … Justin Bieber) and movie stars (Hugh Grant, Kiefer Sutherland and … Lindsey Lohan). A mild night meant a little fresh air on Alibi’s patio. 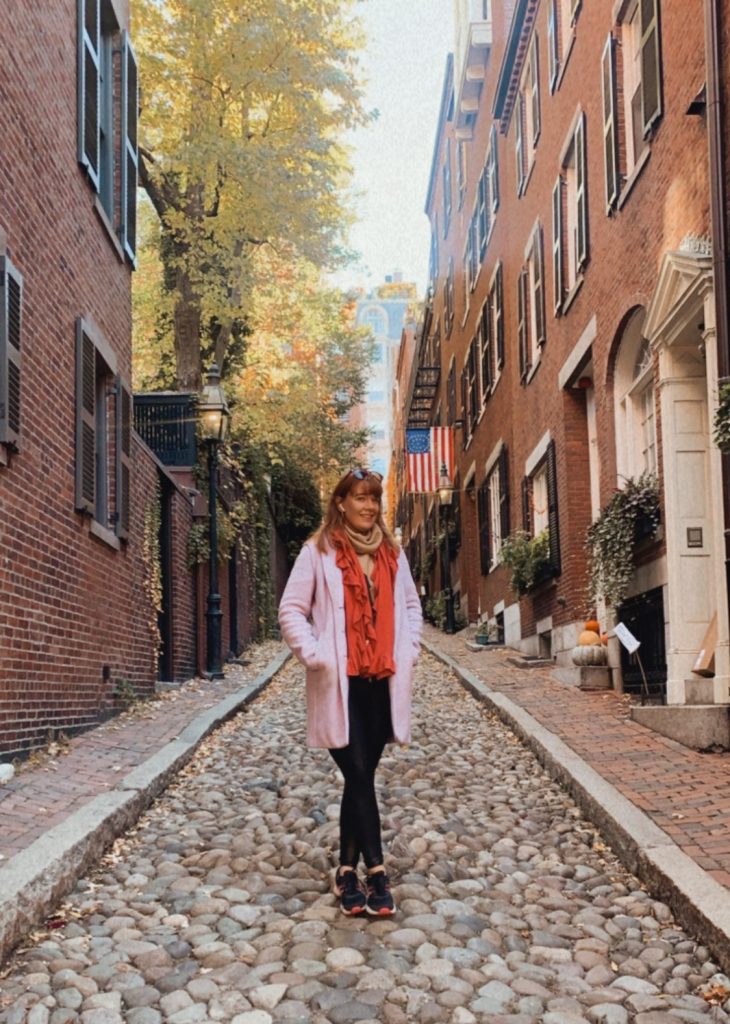 By morning, all of the indulging demanded a brisk walk along the Esplanade to see the Charles glisten in the morning light. After some nature-inspo, I worked my way through the legendary and charming gas-lamp lined streets of the Back Bay neighborhood, stumbling upon Acorn Street, one of the most photographed streets in the Northeast (and yes, even in the early morning hours, there were two influencers there). This narrow cobblestone street is flanked by buildings dating back to the 1800s and is almost always dotted with an American flag or two.

Is brunch the most perfect of meals? I say yes. Wake up when you feel like it, the smell of freshly baked pastry and coffee wafting in the air, mimosas and bloody Marys at the ready…it’s heavenly. At The Liberty, Clink has it all covered, Saturday AND Sunday. We started with the buttery croissant ad blueberry muffin plate, then got down to business. While I was tempted for the organic slow cooked oats with honey roasted walnuts, Cape cranberries and brown sugar, I didn’t brave The Big Dig for oatmeal so I opted for the “Clink Breakfast:” two farmhouse eggs (truly scrambled to perfection), fingerling potatoes, multigrain toast and bacon, which I rarely have, but I couldn’t resist when the server ask if I’d like extra crispy strips.