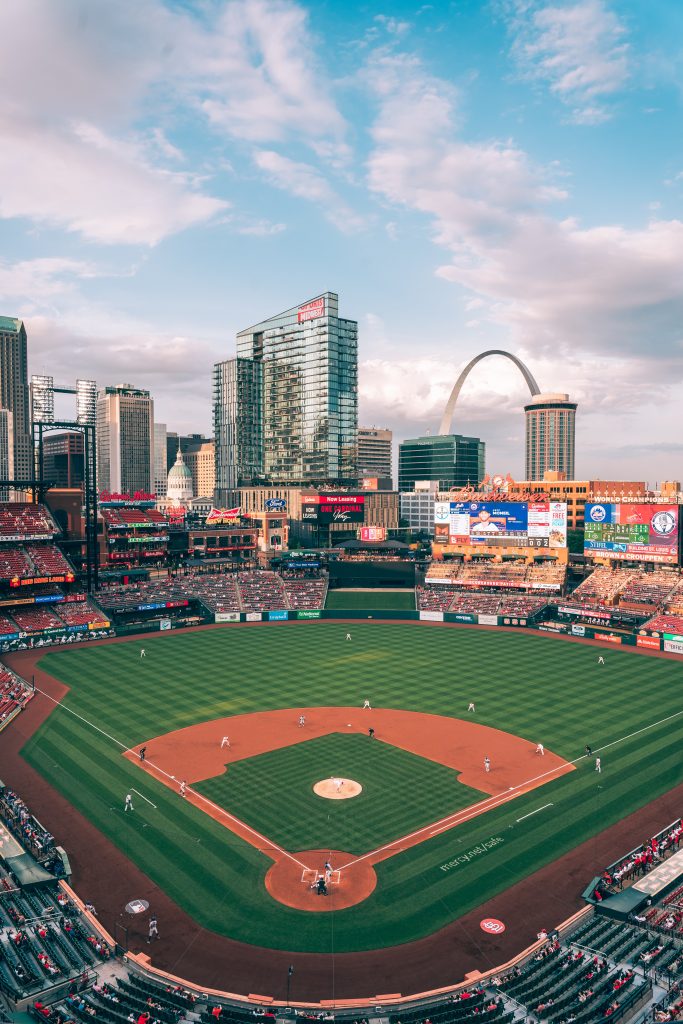 The 2022 MLB season officially got get underway last week (after a tumultuous off season) much to the delight of both ride-or-die fans and casual ballgame casualists. I had this story lined up for a publication but ended up doing a different piece, but I still wanted to share it because it’s a great time of year to start planning a ballpark excursion. Here in Newport, every seat in the house at historic Cardines Field is a good one during the NECBL summer season where you’ll catch stars in the making, but if you’re on the road and want to catch nine innings in utter comfort, check out these best hotels for a baseball adventure:

Baseball-themed decor, an impressive collection of autographed balls and baseball cards, and a DVD library with more than 40 classic baseball films (it’s The Natural for me, followed closely by Field of Dreams) you can enjoy watching on a 50” flatpanel Smart TV are highlights of the Baseball Suite at the Hotel Commonwealth, located just steps from Fenway (and on The Boston Marathon route). At 600 sq. feet, there’s plenty of room to sit back and relax, or head to the Fenway Terrace for a cocktail with Major League Baseball’s oldest ballpark as your backdrop. 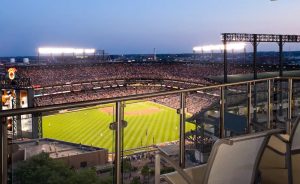 I’m going to date myself here: my first few Orioles games were at Memorial Stadium in Baltimore, which no longer exists. I can still remember the drive down 33rd Street to get there, but it was pretty exciting when they opened Oriole Park at Camden Yards. Though the Hilton Baltimore Inner Harbor is your standard boxy high-rise from the outside, this hotel offers 48 amazing stadium-view rooms, some with balconies, with unobstructed views of games. Even the gym has an extraordinary south facing ballpark view, so you can take in all the action while on the treadmill. 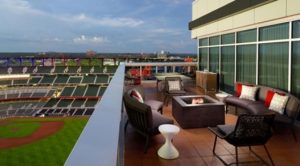 baseball package includes tickets for a behind the scenes tour of the ballpark featuring stops at Monument Garden, the press box, the dugout, Hope & Will’s Sandlot (a state of the art kid’s zone with a rock-climbing wall, zipline, carnival games, etc.), nightly kids turndown service with milk and cookies (I’d like milk and cookies, too, please), breakfast at the hotel and valet parking. Home run. 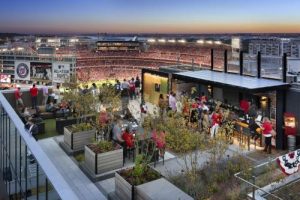 I recently visited my old DC stomping grounds and back when I was a kid, this area of the city looked nothing like it does today (that’s a good thing). National Park didn’t exist (nor did the Nationals) and what a shame, because this area of the District is extraordinary. While the Hampton Inn brand is your standard budget to midscale limited service hotel, this one brings an unexpected wow factor: Top of the Yard Bar & Bites. This rooftop hotspot offers exclusive views directly into Nationals Park, not to mention a panorama of downtown including the Capitol Riverfront and iconic monuments. 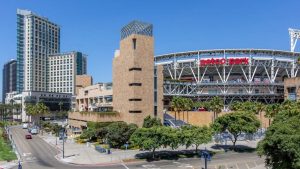 Welcome to the only hotel in the U.S. connected to a major league stadium. With a convenient skybridge to Petco Park, home San Diego Padres, the Omni San Diego Hotel provides a bird’s eye view of the ballfield and even offers tickets for the Petco Behind The Scene Tour featuring the Padres Hall of Fame, the press box and a private luxury suite. Located in the heart of San Diego’s Gaslamp Quarter, this hotel is ideal for exploring, or just relax and sip a cocktail at the Palm Terrace, taking in a game on the giant flat screen.

St. Louis: The Hilton St. Louis at the Ballpark 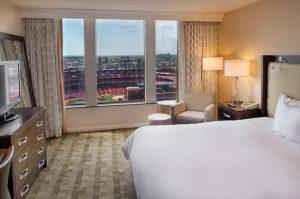 With unrivaled views of Busch Stadium, the Hilton St. Louis at the Ballpark is the Gateway to the West’s hub of baseball activity. For the best view, book at top floor stadium view room where you can watch the game right from your bed. Another option? The 360 Rooftop bar is insane; soaring nearly 400 feet above downtown St. Louis with views of the Gateway Arch, the mighty Mississippi and the sites of St. Louis near and far. 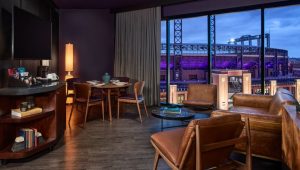 The Rally is a delightful departure from the many major brand hotels listed here. Located in Lower Downtown Denver (what some are calling “LoDo”), the baseball-themed hotel is adjacent to Coors Field at the city’s newest entertainment epicenter playground, McGregor Square, which is actually owned by the Colorado Rockies. The Rally, opened in 2021, is bedecked in baseball memorabilia throughout and offers the “Game On” package featuring two infield box tickets to a Rockies home game.

While not luxurious (note: no air conditioning), The Chancellor’s historic charm and wins over 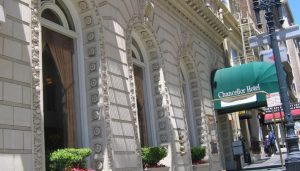 guests every time. Located in the heart of San Francisco (no exaggeration: the Cable Car stops at the hotel’s doorstep), The Chancellor offers a San Francisco Giants package featuring a pair of tickets to a game in the lower box section (Section 129) at Oracle Park. Built for the Panama Pacific International Exposition of 1915, The Chancellor was the tallest hotel building in the city when it opened in 1914. Period details can be found throughout and bonus points for the hotel’s “pillow menu,” offering 12 different pillows to choose from for your added comfort.

…and a bonus mention to salute our neighbors to the North: 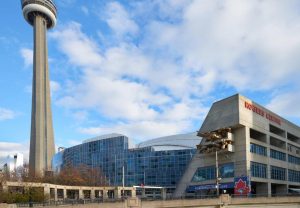 Previous Post: « Reset, Revitalize and Renew: Reawakening Skin Health with SeaMist MedSpa in Newport
Next Post: Two Fun Food Events for a Cause … and Paws »